Love Is a Four Letter Word 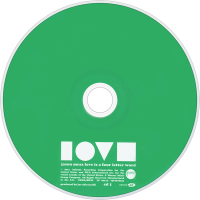 Love Is a Four Letter Word is the fourth studio album by American singer-songwriter Jason Mraz, which was released on April 13, 2012 through Atlantic Records. "I Won't Give Up" was released as the album's first single on January 3, 2012.

In November 2009, Mraz posted on his MySpace page plans for a new album to be recorded starting in December, stating "In 2 weeks time I will enter the studio and begin recording the next album. Only a handful of songs are written and slated but the momentum of love is with me. Every day new verses get added on. The songs are coming together piece by piece. The process is unlike any of the other records before this. It's like I'm being gifted the album without having to do the work. I'm creating that in 6 months the project will be complete and then we'll hit the road again with new sounds and new musicians."

In 2010, Mraz spent time in London, England, where he worked on songs for his new album with producer Martin Terefe and wrote with British singer-songwriter Dido. In August 2010, Mraz had a Q&A interview with Spin magazine. In the interview, he stated the current possible titles for his fourth album are Peace Canoe or The Love Album.

On December 8, 2011, Mraz told Jeff Benjamin of Billboard that the "album is finished" except for one track he was attempting to re-work as an acoustic version. He described the album as, "It's not a departure in the sound of the genre in any way, it's just different tones, different textures. Musically, I think people are going to like it. It's personal. It's melodic. And it's mellow. There's a couple of up-tempo tunes, but mostly the rhythm of the heartbeat kind of takes precedence on this record. Medium-tempo tunes; which I love. It feels more like the pace of life. At least, based on my life and what I've been doing."

On January 20, 2012, during a performance streamed live from the Bing Bar at the Sundance Film Festival, Mraz told the audience that the album's title is Love Is a Four Letter Word.

User Album Review
Jason Mraz is a cheery looking chap. You’d be too, if your previous albums collected enough platinum discs to keep Chilean miners in fresh chupallas until the sun swells red and devours us all. But his glass-half-full demeanour doesn’t always translate on studio releases, which perhaps explains the extensive live catalogue he’s already built up.

This fourth set, arriving four years after his last (We Sing. We Dance. We Steal Things.), is unlikely to convince newcomers of his chart-conquering talents, despite representing discernable evolution. He pushes himself vocally, the strain occasionally (and satisfyingly) evident; but any soul is marked only in an understated manner. Tracks with below-the-surface emotion, like I Won’t Give Up, are robbed of opportunities to engage intimately by heavy-handed production better suited to pop-country juggernauts roaring out of Nashville.

Mraz is a fine, polished performer, and his songs don’t lack heart. But these simple arrangements would perhaps work better if they retained a little roughness. Little sticks in the memory, despite effortlessly accomplished wordplay peppering 5/6 and The World as I See It – Mraz isn’t short of a neat lyrical turn or two. Both are swelled by strings which feel like afterthought constituents in the grand scheme of each piece. More stitched into Mraz’s acoustic fabric is the brass accompanying The Freedom Song, the opener’s upbeat tone lending its trumpet and trombone bursts some sunshine synchronicity.

Having reached number two in the UK and USA, and gone one better in Canada, the commercial credentials of Love Is a Four Letter Word are indisputable. But for a listener who’s only been aware of Mraz by reputation, this is no instant-fix point of entry. It relies on past experiences, knowledge of what the artist is capable of rather than anything he delivers with consistency across these 12 songs. It represents progression on a career path that might’ve otherwise struck a cul-de-sac, and fans will acknowledge that. But a few stray fireworks amongst these controlled displays would have lent Mraz’s wide, optimistic horizons some additional colour and heat.