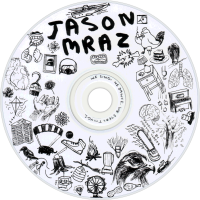 We Sing. We Dance. We Steal Things. is the third studio album by Jason Mraz released on May 13, 2008. The album peaked at number three in the Billboard 200, Mraz's highest-peaking album thus far. Mraz took the name of the album from a work by artist David Shrigley.

Progress of the recording of the album has been documented on the YouTube series "Crazy Man's Ju-ju" which contain clips from San Diego and London, where most of the album was formed. "I'm Yours" is the first single from the album and was made available on iTunes, Zune Marketplace, and Amazon.com on February 12, 2008. The album features collaborations with James Morrison on the track "Details in the Fabric" and with Colbie Caillat on the track "Lucky."

The album was preceded by three EPs released monthly for a limited time. We Sing. was released on March 18. We Dance. was released on April 15. The third installment, We Steal Things., was released as part of a digital bundle through iTunes, JasonMraz.com, and AtlanticRecords.com upon the release of the album. The third EP was only released along with the new studio album May 13, 2008. As of March 17, 2010 the album has sold 1,491,736 copies in the U.S. and was certified Platinum by the RIAA.

On November 18, 2008, the album was re-released with the name We Sing. We Dance. We Steal Things. Limited Edition. The re-released album is a three disc set that includes the original 12-track CD, the second disc includes the three EPs all on one disc, and the third DVD includes an unreleased full-band concert Live at the Highline Ballroom in NYC, a 30-minute documentary titled "Here We Are," and a preview to his "a thousand things." polaroid book. The packaging also includes a 20-page CD booklet with full lyrics and additional artwork.