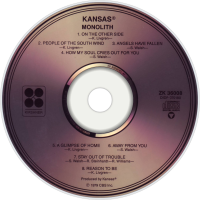 Monolith is the sixth studio album by American progressive rock band Kansas, released in 1979 (see 1979 in music). The album was remastered and reissued in 2011, as a Japanese import vinyl-replica Blu-spec CD (Epic EICP 20078). A domestic version of the remaster was released in standard CD format in the U.S. as part of the Legacy Complete Album Collection series' Kansas entry.

Although this was Kansas' third straight studio album to hit the Billboard Top 10, its sales were slow compared to the previous releases, and its one Top 40 hit, "People of the South Wind" enjoyed only brief popularity. The title refers to the meaning of the Siouan word "Kansa," the Indian tribe for which the state of Kansas was named. On their 80-city U.S. tour, the band's set list featured the entire album early in the tour, though by the time the tour ended, about half the songs had been cut from the live set in favor of older numbers. A national broadcast of their show at Alpine Valley, Wisconsin on this tour featured the entire album and is one of the most popular unissued live recordings of the band. Believing that fans didn't like Monolith, they did not perform any of the songs again until the mid 1990s, when they revived "People of the South Wind" and "Reason to Be" briefly. In recent years, the opening track, "On the Other Side," has been featured in performances on and off on tours, including that for the Device Voice Drum DVD, although not appearing on the DVD itself.

Following the U.S. Monolith tour, the band had its first tour of Japan, in January 1980. The band performed four songs from Monolith on their Japanese tour: "People of the South Wind," "Stay out of Trouble," "How My Soul Cries out for You" (the set closer featuring a dramatic performance including a body dropping from the ceiling), and "On the Other Side" (which was released as an edited picture sleeve single in Japan). A special promotional album featuring three songs from Monolith and five of their earlier popular songs (2 studio versions, and 3 live versions) was issued to radio stations there to publicize the dates, entitled "Kansas Monolith Tour 1980 in Japan."

Even though MTV was still two years away, promotional music videos were produced for four tracks on Monolith: "On The Other Side," "People Of The South Wind," "Away From You," and "Reason To Be."

Livgren's lyrics on Monolith were partly influenced by The Urantia Book, of which he was a devotee before his conversion to Christianity.