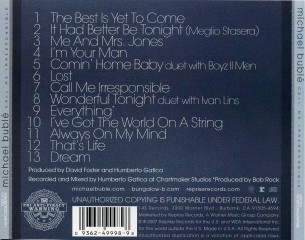 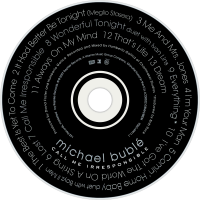 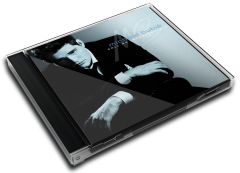 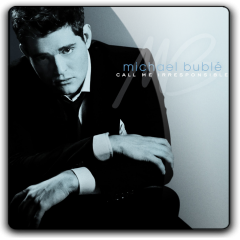 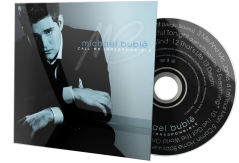 Call Me Irresponsible is the fifth studio album released by Grammy Award-winning Canadian jazz singer Michael Bublé. The album was released on May 1, 2007
The album's first single, "Everything", peaked at #46 on the U.S. Hot 100, Bublé's highest peaking song until "Haven't Met You Yet" became his first Top 40 hit in 2009. It has also debuted at number 3 on the Canadian BDS Airplay Charts and now holds the record for the highest debut ever on that chart. It also peaked at number 19 on the Australian ARIA Singles chart. Bublé appeared on an American Idol season 6 results show to sing "Call Me Irresponsible" when scheduled singer Tony Bennett, with whom he had collaborated before on the album Duets: An American Classic was unable to attend. On Monday, April 23, 2007, members of Bublé's official fanclub Bungalow B were given an exclusive listening party of the album's tracks and a look at a video clip at "Lost", Bublé's second original song. On this day, his official site was also given a makeover to match his coming album and his official YouTube channel released the video for the lead single. The channel also has behind-the-scenes videos and short snippets of videos used to make various commercials and preview clips. The entire album leaked shortly before its release. This album won the Grammy Award for Best Traditional Pop Vocal Album in 2008.

Album Review
Juno-winning, Grammy-nominated Canadian warbler, Michael Bublé, has had critics tripping over themselves to claim him as a latter-day Frank Sinatra. But aren't such accolades rendered superfluous when wheeled out more regularly than a Starbucks frappucino (which Bublé helped the drinks company advertise back in 2005)?
Jamie Cullum, Peter Cincotti and Harry Connick Jr. are just some of the contemporary crooners who've been branded with the neo-Sinatra stamp, a label that suggests not only a signature singing style and a nostalgic temperament, but also - at worst - an utter lack of originality.
To be fair to Bublé, his albums to date - 2003's Michael Bublé and 2005's It's Time - show he can hold a tune. Comprised mainly of covers, these collections successfully promote a charming, even chivalrous personality, with a frictionless voice capable of churning out pop classics, torch songs, sentimental ballads and upbeat Latino tunes to order.
Call Me Irresponsible continues in much the same vein, though the crisp finger-snaps and swinging arrangements of opener "The Best Is Yet To Come," immediately suggests this third studio album might be punchier than its predecessors.
The infectious joie de vivre of tunes like "It Had Better Be Tonight (Meglio Stasera)" and Mel Torme's "Coming Home Baby," (which features background harmonics from Boyz II Men) indeed find Bublé at his very best. You can almost imagine him in the studio - tie loosened, suit-sleeves rolled up, tiny pools of perspiration building on his forehead - as he lets fly.
His version of "Me & Mrs Jones" is a subtler affair, though still engaging, while Leonard Cohen's pathos-infused "I'm Your Man" gets a very reasonable rethink, complete with tension-building pauses and shimmering, Mancini-style strings.
It's the slower, schmaltzy songs that get the album into trouble.
The bossa-esque version of Clapton's "Wonderful Tonight" and the cover of Presley's "Always On My Mind" are unforgivably mawkish; his own songs - "Everything," with its pseudo-Latin rhythm and "Island-In-The-Stream" style verses, and the lachrymose "Lost" - are only slightly more convincing.
The perky big band groove of "I've Got The World On A String" and the Gospel-backed, bluesy "That's Life" help prevent the album sliding into total coffee-shop pop.
Bublé hasn't reinvented the wheel here, but his choice of covers is astute and he has an undeniable way with a song. Pop pioneer he ain't; but he does perhaps deserve a little more credit than being a 'Sinatra clone'.