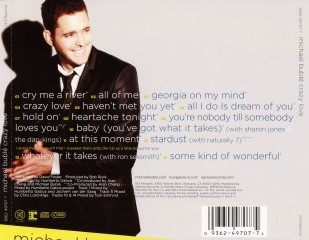 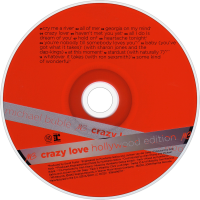 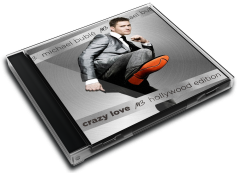 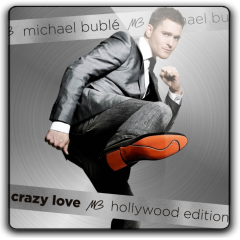 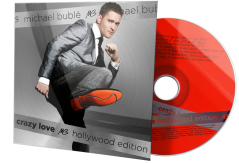 Buoyed by the popularity of the hit contemporary pop ballad "Home," singer Michael Bublé's 2005 album, It's Time, clearly positioned the vocalist as the preeminent neo-crooner of his generation. Bublé's 2007 follow-up, Call Me Irresponsible, only further reinforced this notion. Not only had he come into his own as a lithe, swaggering stage performer with a knack for jazzing a crowd, but he had also grown into a virtuoso singer. Sure, he'd never drop nor deny the Sinatra comparisons, but now Bublé's voice -- breezy, tender, and controlled -- was his own. It didn't hurt, either, that he and his producers found the perfect balance of old-school popular song standards and more modern pop covers and originals that at once grounded his talent in tradition and pushed him toward the pop horizon. All of this is brought to bear on Bublé's 2009 effort, Crazy Love. Easily the singer's most stylistically wide-ranging album, it is also one of his brightest, poppiest, and most fun. Bublé kicks things off with the theatrical, epic ballad "Cry Me a River" and proceeds to milk the tune with burnished breath, eking out the drama line by line. It's over the top for sure, but Bublé takes you to the edge of the cliff, prepares to jump, and then gives you a knowing wink that says, not quite yet -- there's more fun to be had. And what fun it is with Bublé swinging through "All of Me," and killin' Van Morrison's classic "Crazy Love" with a light and yearning touch. And just as "Home" worked to showcase Bublé's own writing abilities, here we get the sunshine pop of "Haven't Met You Yet" -- a skippy, jaunty little song that brings to mind a mix of the Carpenters and Chicago. Throw in a rollicking and soulful duet with Sharon Jones & the Dap Kings on "Baby (You've Got What It Takes)," and a fabulously old-school close-harmony version of "Stardust" with Bublé backed by the vocal ensemble Naturally 7, and Crazy Love really starts to come together. All of this would be enough to fall in love with the album, but then Bublé goes and throws in a last minute overture by duetting with fellow Canadian singer/songwriter Ron Sexsmith on Sexsmith's ballad "Whatever It Takes." A devastating, afterglow-ready paean for romance, the song is a modern-day classic that pairs one of the most underrated and ignored songwriters of his generation next to one of the most ballyhooed in Bublé -- a classy move for sure. The result, like the rest of Crazy Love, is pure magic.

User Album Review
Michael Bublé’s decision to enter the studio with his band alongside him, a format tried and tested by his idols Frank Sinatra and Dean Martin, has paid off handsomely. Each song on this flamboyant new CD thrills the ear as though it were a live performance.
Bublé lays down his cards from the word go with a highly theatrical interpretation of the torch song Cry Me a River – far removed from Julie London’s sultry rendition which she recorded many moons ago. He doesn’t spare us the pain of a man thwarted in love, but neither does he whip up a frenzy of self-regarding pity that has become a cliché of many performances. The epic scoring of the opening owes something to the Hans Zimmer school of soundtracks, and there is also a warm string arrangement that dovetails comfortably around his refrain.
By contrast, All of Me begins with piano in nightclub style and builds up into a swing arrangement with some Neal Hefti stings on brass. Bublé’s seductive way with the line, “Take my lips, I wanna lose them”, is one instance where this artist invests a familiar lyric with a conversational touch as though newly minted. The same goes for You’re Nobody Till Somebody Loves You. His Georgia On My Mind is a gem: the gentle string opening with a touch of vibraphone, the close harmony vocals, his seamless phrasing and a mellow clarinet solo ensure that this account has classic status. In the pay-off, Bublé leaves one in no doubt that the girl on his mind is Georgia, rather than the American state that as some have suggested might have been the inspiration for this song.
All I Do Is Dream Of You, a song from the 1930s, is pure heaven in its late 1950s make-over, and Crazy Love acknowledges 1970, the year the Van Morrison original was written, by introducing acoustic guitar. Bublé’s two new songs catch the spirit of today. The first, Haven’t Met You Yet, is wrapped up in a frankly commercial, chart-orientated arrangement; the second, Hold On, points to Simon and Garfunkel in its simplicity. Even more entertaining are Bublé’s takes on Heartache Tonight, with its tear-up accompaniment, and Baby (You’ve Got What It Takes), a happy-go-lucky duet with Sharon Stone.
This wonderful album would surely have been voted ‘ring-a-ding-ding’ by Frank and Dean!