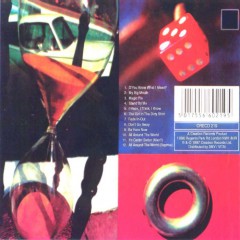 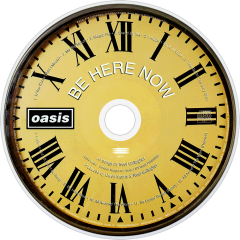 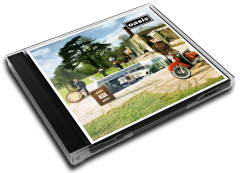 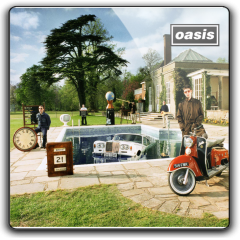 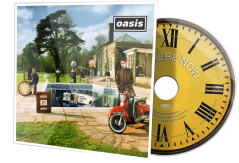 Be Here Now is the third studio album by English rock band Oasis, released in August 1997. The album was highly anticipated by both music critics and fans after the band's worldwide success with their 1994 debut Definitely Maybe and its 1995 follow-up (What's the Story) Morning Glory?. Be Here Now's pre-release build up led to considerable hype within both the music and mainstream press. At that point, Oasis were at the height of their fame, and Be Here Now became the United Kingdom's fastest selling album to date, selling over 420,000 units on the first day of release, and over one million within two weeks. As of 2008, the album has sold eight million copies worldwide.

Oasis' management company Ignition were aware of the dangers of overexposure, and before its release sought to control the media's access to the album. Ignition's campaign included limiting pre-release radio airplay, and requesting that journalists sign gag agreements. These tactics resulted in the alienation of members of both the music and mainstream media, as well as many industry personnel connected with the band. Ignition's attempts to limit pre-release access served to fuel large scale speculation and publicity within the British music scene.
Although initial reviews were positive, retrospectively the album is viewed by much of the music press, the public, and by most members of the band as over-indulgent and bloated. In 2007, Q magazine, having given the album a five-star rave review on its release, described the fact that Be Here Now is often thought of as "a disastrous, overblown folly-the moment when Oasis, their judgement clouded by drugs and blanket adulation, ran aground on their own sky-high self-belief." The album's producer Owen Morris said of the recording sessions: "The only reason anyone was there was the money. Noel had decided Liam was a shit singer. Liam had decided he hated Noel's songs Massive amounts of drugs. Big fights. Bad vibes. Shit recordings."

User Album Review
If the art of rock — and of making great rock records — is essentially a matter of putting the right notes in the right order over a good beat at top volume, then “D’You Know What I Mean?,” Oasis opening broadside on Be Here Now, is seven minutes of simple, focused genius. The important stuff is all here: the squealing feedback, chain-saw distortion and coughing wah-wah of a huge, brutish guitar orchestra; a slow, tough rhythm, stoked for extra measure by a drum sample from N.W.A’s Straight Outta Compton; a singer who ratchets up the cocksure posturing of the lyrics (“All my people right here, right now/They know what I mean”) with a sour howl and arrogant relish; a big finish in which everything in the mix — the guitars, the braying vocals, the fat whack of the rhythm section — is sucked into the jet-engine roar of the distended chorus.

There are references to God in the lyrics, and the song appears to be about a crisis of faith. But you wouldn’t know it from the attitude pouring through the amps. “D’You Know What I Mean?” — and for that matter the rest of Be Here Now— is music built for impact, not explanation. You want epic narrative, grand metaphor and explicit spiritual testimony? Get a book of poetry — or a Van Morrison record.

Oasis are not, and have never been, a complex listening experience; in fact, they’ve basically made the same album thrice. Like 1994’s Definitely Maybe and 1995’s (What’s the Story) Morning Glory?, Be Here Now is ’60s and ’70s rock classcism writ large and loud, all broad strokes and bullish enthusiasm. As the band’s songwriter, co-producer and (for all intents and purposes) iron ruler, guitarist Noel Gallagher doesn’t spend any sweat on highbrow drama or intellectual pretense. He fires up sing-along hooks with industrial-strength glam-rock licks; he drapes his words and music in the reflected splendor of the Beatles at every available turn, mostly through song — and album-title references, and spit-shines the results with a kind of roughneck sentimentality, heard to most obvious effect in the Sunday-night-pub-chorale endings of “Magic Pie” and “All Around the World.”

It’s a formula that can go either way: brilliant, steel-plated consistency or vacuous, shopworn predictability. Gallagher and Oasis pull it off, in great part, because they do not concede any possibility of fucking up. A lot of Gallagher’s lyrics are catch-phrase cocktails of youthful optimism and hard-boy temperament: “Comin’ in out of nowhere/Singing rhapsody” (“Fade In-Out”); “Into my big mouth/You could fly a plane” (“My Big Mouth”). But the most contagious thing about buzz bombs like “My Big Mouth,” “I Hope, I Think, I Know” and “It’s Gettin’ Better (Man!!)” is the sheer physical confidence of the music, particularly in the tandem rock ribbed guitars of Gallagher and Bone-head (a k a Paul Arthurs), and the way singer Liam Gallagher literally assaults the songs written for him by his older brother.

Much has been made of the John Lennon factor in Liam’s nasally, brattish intonation. In fact, his voice is a flat, thin thing. What’s remarkable about it is its emphatic, almost fighting quality; Liam enunciates Noel’s lyrics with snappish irritation and grinds the vowels in words like fade and away into high-tension whines. By the time Liam gets done with the chorus in Noel’s Big Melodrama ballad, “Stand by Me” — “Stand by me-e-e/Nobody kno-woa-ahs/The way it’s gon-nah-h be-e-e” — it sounds full of portent, if not bona fide linear meaning.

The payoff in Noel’s writing is always in the choruses; all riffs, hooks and bridges lead there. So Noel feeds Liam words and phrases that, above all, sound good. While it’s hard to excuse jury-rigged verse like “A cold and frosty morning/There’s not a lot to say/About the things caught in my mind” (“Don’t Go Away”), sometimes in pop music, melody, muscle and mouthing off can be their own substantial reward.

But only for so long. Oasis can’t rely on this Abbey Road-meets-Never Mind the Bollocks routine forever. There are already signs of strain on Be Here Now. “Stand by Me” is a little too close to Morning Glory‘s “Don’t Look Back in Anger” for coincidence, and there is an overreliance on swollen “Hey Jude”-style finales in the ballads.

Which brings up the Beatles issue. Noel Gallagher’s love of the group is genuine. “Sing a song for me/One from Let It Be,” he writes in “Be Here Now” — a title cribbed from Lennon’s infamous quip to an interviewer who asked him about the deep, underlying philosophy of rock & roll. But Noel is starting to overplay his hand; dropping a line like “The fool on the hill and I feel fine” in the middle of “D’You Know What I Mean?” smacks of laziness more than fannish ardor.

Maybe if Oasis weren’t so ultra-mega-huge in England and smiled more onstage when they came here, it would be easier to accept them for what they are: a great pop band with a long memory. What will they, or their records, mean in 20 years’ time? Who cares? Be here now. History will take care of itself.

zag says: 1 year ago
Really good album with some catchy tunes for sure.