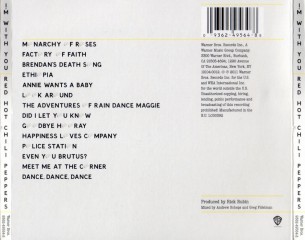 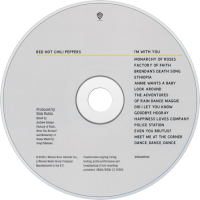 I'm With You is the tenth studio album by American rock band Red Hot Chili Peppers. The album was released by Warner Bros. Records on August 29, 2011, a day earlier than originally planned. The album made its debut at number one in eighteen different countries including the United Kingdom while reaching number two in the United States and Canada.

Produced by Rick Rubin, it is the band's first studio album to feature guitarist Josh Klinghoffer, following the departure of John Frusciante in 2009, and is their first since 2006's Stadium Arcadium, marking the longest gap, to date, between Red Hot Chili Peppers' studio albums. The album received mostly favorable reviews with many praising newcomer Josh Klinghoffer for breathing new life into the veteran group although some critics felt otherwise and that the record lacked the focus and creativity from the previous records that featured Frusciante. The album has so far produced four singles including the number one hit, "The Adventures of Rain Dance Maggie", "Monarchy of Roses", "Look Around" and "Brendan's Death Song". "Did I Let You Know" was released exclusively in Brazil thanks to response from a poll voted on by the fans although it wasn't considered a proper single. A Rolling Stone Reader's Poll named I'm with You the 8th best album of 2011 and the album was also nominated for one Grammy Award for Best Rock Album.

Regarding the album, vocalist Anthony Kiedis noted, "there is no question - this is a beginning," with drummer Chad Smith stating, "this is a new band. Same name, but it's a new band."

The band's official site held a global listening party on August 22, 2011 where they streamed the entire album. Various radio stations throughout the world began playing tracks on the same date leading up to the album's release. The full album was also made available to stream for free on the iTunes Store.

User Album Review
Over a career spanning nearly 30 years, Red Hot Chili Peppers have weathered many storms. Drug addiction threatened to swallow the band whole at various points: founding member Hilel Slovak died of a heroin overdose in 1988 while long-serving guitarist John Frusciante and bandleader Anthony Kiedis have both endured long struggles with substance abuse. It was Frusciante’s triumphant return to the group that led to 1999’s Californication, a hugely successful career-best that, for the most part, eschewed the spittle and venom of their earlier years in favour of a more reflective sound.
I’m With You is the band’s first album to be made with new guitarist Josh Klinghoffer, Frusciante again out of the picture, and at 14 songs is a blessedly more concise affair than 2006’s sprawling Stadium Arcadium. Where that record came across as an ambitious (if flawed) synthesis of the group’s myriad styles to date, I’m With You aims at something slightly different but remains somewhat watered-down – a portrait of a band hitting all the right notes yet failing to really ignite.
Like most Chilis LPs though, there are moments to savour. On the first day of rehearsals for this set, Kiedis was informed of the death of long-time friend to the band and early champion Brendan Mullen, an influential figure on the LA punk scene. Brendan’s Death Song was written out of a jam that followed his breaking the news to the rest of the group: a strong, assured melody anchored by remarkable work from drummer Chad Smith. It reaches a clattering cacophony before receding gracefully; a celebration of life and contemplation of mortality as fine as they have ever produced.
The more refined songs on I’m With You undoubtedly prove the most effective. Meet Me at the Corner and Police Station boast warm female backing vocals and neat, unobtrusive turns from Klinghoffer, while the closing Dance Dance Dance hews closest to the ‘new beginning’ Kiedis has alluded to in promoting the record – a spacey, laidback groove built around a persistent Flea bassline.
Single The Adventures of Rain Dance Maggie exemplifies the Chilis’ main problem here: a promising set of verses marred by a plodding, nothing chorus. Perhaps to be expected as the band settles into its new, Frusciante-less configuration but disappointing nonetheless, I’m With You is a solid, decent enough 10th album, but it’s far from vital.