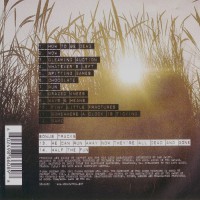 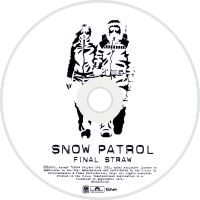 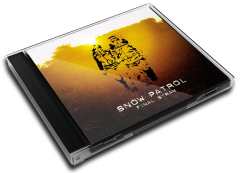 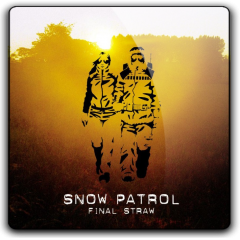 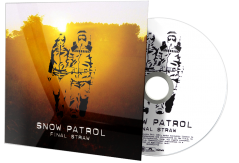 Final Straw is the third album by Snow Patrol, released in the United Kingdom and the Republic of Ireland in 2003 and in the United States in 2004. The album is notable for bringing the band their first mainstream success outside of their native countries of Northern Ireland and Scotland.
The album was re-released in the UK in 2004 with two extra tracks, before being exported to the U.S. (without the bonus tracks). The album was also released on SACD and DualDisc with 5.1 Surround mixes

Taken line by line, Gary Lightbody's lyrics on Snow Patrol's third album, Final Straw, don't say much: "Ways and Means" features the line, "Is there a t-shirt I can wear/ 'Cause I'm soaking look at me." "Grazed Knees" contains the banal couplet, "Your breakfast will get cold/ I really have to go." And "Spitting Games" veers dangerously close to high school poetry: "My heart is bursting in your perfect eyes/ As blue as oceans and as pure as skies." But taken together, these not-too-quotable lines add up to a surprising whole: an album as argument, wherein Lightbody pleads with lovers to consider his side of the story ("How to Be Dead"), or to give him another chance ("Grazed Knees"), or simply to notice him ("Spitting Games"). Rather than dwelling the dissolved romances of his past, Lightbody dwells in the here-and-now, speaking not to his audience but to his lovers, and candidly reveals a centrifuge of conflicting emotions and awkward confessions.

Writing in plainspoken lyrics that sound like the kind of speech you rehearse in your head for days, Lightbody has carved himself a niche among confessional singer/songwriters by documenting the gradual accumulation of grievances and recriminations that creates a rift between two people who ostensibly love each other. The problems he describes usually aren't as tangible or as black-and-white as, say, cheating, but Lightbody still manages to make these small predicaments dramatic and compelling.

If the lyrics carry the feelings, then the music itself is restrained: tastefully plaintive vocals and churning guitars generate rigid, unwavering tempos that approximate dance music. It's a more sophisticated sound than that of the band's previous albums, or of Lightbody's side project, The Reindeer Section. In addition to adding guitarist Nathan Connolly, Snow Patrol have brought in producer Garret "Jacknife" Lee (formerly of the band Compulsion), who gathers elements from the Pixies and My Bloody Valentine, as well as from more obvious sources like Radiohead, into a straightforward, polished sound that works well for the first half of Final Straw.

The pristine quality of Snow Patrol's music and Garret Lee's production, however, belies the rawness of Lightbody's words, and too often, the songs suffer from the contrast. It's not that there aren't bursts of noisy feedback or filtered vocals or the occasional programmed beats; it's that each one sounds perfectly placed, too tidy, so overthought and foreordained that the songs sound staid and stolid.

This is especially noticeable in the middle of Final Straw, when Snow Patrol indulge in some Coldplay moments. "Run" exists solely for its uplifting, if oddly fatalistic, chorus ("Light up, light up/ As if you have a choice"), which will surely have concertgoers raising their lighters during the inevitable second-encore singalong. Actually, the song is unapologetically anthemic, until Lee throws in some schmaltzy strings at the climax that practically cry out to score the big smooch in some teen-friendly romantic comedy.

Deploying more upbeat tempos and pop harmonies, "Ways and Means" and "Tiny Little Fractures" try to regain the momentum of the album's first half. But "Somewhere a Clock Is Ticking" crawls along at a slow pace, its gloomy atmosphere not quite enough to sustain it, and "Same" attempts a grand finale that only sounds redundant after "Run". As such, despite the surprising cohesion of its modest lyrics, Final Straw remains less than the sum of its parts.