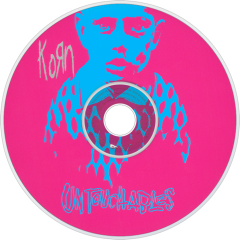 Untouchables is the fifth studio album by American nu metal band Korn. The album was officially released on June 11, 2002 and featured the Grammy-winning single "Here to Stay". Untouchables debuted at number two on the Billboard 200 with 434,000 copies sold during its first week. The album received positive reviews from music critics. Untouchables has sold over 4 million copies worldwide.