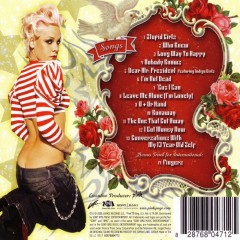 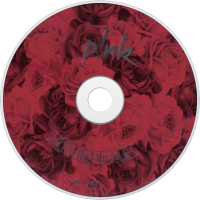 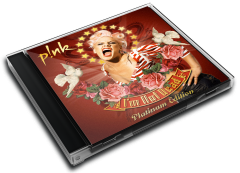 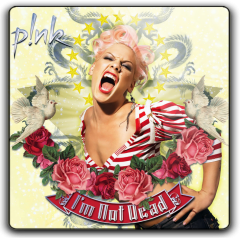 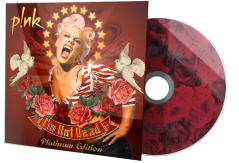 I'm Not Dead is the fourth studio album by American recording artist and songwriter Pink. The album was released on April 4, 2006 in the United States, to coincide the same release date of Pink's debut album, Can't Take Me Home (2000).
The album marks Pink's comeback to music after a three-year break which followed the poor commercial and critical performances of her previous album, Try This. Originally titled Long Way to Happy, a song on the album, the title was changed to I'm Not Dead, also a song on the album, in order to match the comeback nature of the album, and its heavy tone in terms of lyrical content, strong language and edgy sound. I'm Not Dead is majorly a pop rock album, but includes country, alternative and R&B influences.
The release of I'm Not Dead was preceded by its controversial lead single, "Stupid Girls", a top 20 hit on the U.S. Billboard Hot 100 the video of which earned Pink an MTV Video Music Award. The album's second and third singles, "Who Knew" and "U + Ur Hand", reached the top ten and revived the album's sales fortunes in the U.S., leading to a platinum certification from the RIAA for sales of one million. The two songs are also Pink's first two singles to achieve Platinum certifications. Subsequent regional singles include "Nobody Knows", "Leave Me Alone (I'm Lonely)", "Dear Mr. President" and "'Cuz I Can." A Platinum Edition of the album was issued with bonus tracks, remixes and a DVD.

User Album Review
Today's pop market is very different to the one in which P!nk was unleashed on the world. Then, she was a breath of fresh air, bringing rebellious attitudes to a world filled with Swedish pop svengali Max Martin's bubblegum productions. Now, "Cuz I Can", the standout track on this album with its oddball 'We All Want Ice Cream' chorus is produced by non other than Mr. Martin himself. The scathing "Stupid Girls" certainly shows that P!nk feels more alternative than she actually is.
It's not only that though. Today, charts are peppered with rock-chicks and while most tracks on I'm not Dead are radio friendly, songs like "Leave Me Alone" and "Long Way to Happy" go too far down that route, lacking P!nk's individuality, and positively oozing Hilary Duff-ness.
One thing is clear though: Kelly Clarkson has taken over as chart's rock queen and nothing on I'm Not Dead begins to match up to "Since You Been Gone".