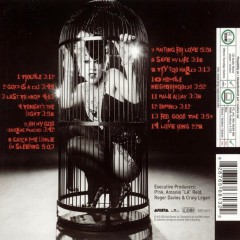 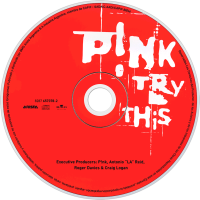 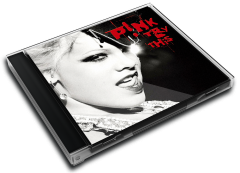 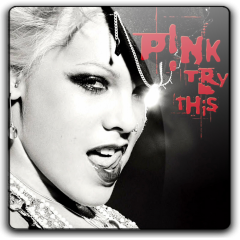 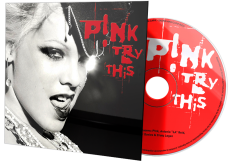 Try This is the third studio album by recording artist Pink, released on November 11, 2003. It featured the singles "Trouble," which earned Pink a Grammy Award, "God Is a DJ" and "Last to Know". Despite being P!nk's lowest-selling album, Try This was certified Platinum by the RIAA for shipments of over one million copies. Pink supported the album with the Try This Tour in 2004 across Europe and Australia.

Background
In April 2000, P!nk released her debut album, Can't Take Me Home, to moderate critical and commercial success. Executive produced by L.A. Reid, the album featured elements of dance-pop and R&B throughout, and production by well-known producers such as Babyface, Kevin "She'kspere" Biggs and Kandi Burruss, best known for their works with prominent R&B acts such as TLC.

Wanting to move away from the R&B-influenced sound of her debut album, P!nk took more creative control over the production of her sophomore album, Missundaztood, acting as the album's executive producer alongside Reid, who served as executive producer for her debut. Working with producers such as Linda Perry and Scott Storch, P!nk moved in a more pop-rock direction for the album, and it was released to critical and commercial success. Eventually selling over 13 million copies worldwide, it was also certified 5x Platinum by the RIAA, becoming her biggest selling album to date.

After the success of Missundaztood and its accompanying worldwide Party Tour, P!nk began work on her third studio album. Wanting to expand more on the rock sound she explored with Missundaztood, P!nk sought out producers and writers that had experience within the genre. Most of the tracks on Try This were produced and co-written by punk band Rancid singer and guitarist Tim Armstrong, whom Pink met through a mutual friend at a Transplants video shoot. The two hit it off and Pink ended up co-writing ten songs with him in a week when Transplants were on a tour with the Foo Fighters. Eight of these tracks appeared on Try This, which also features three songs written with Linda Perry, who co-wrote much of Missundaztood (2001), Pink's second album. The album includes a collaboration with electroclash artist Peaches, "Oh My God", and Pink's contribution to the Charlie's Angels: Full Throttle film soundtrack, "Feel Good Time" (produced by and featuring William Orbit), as a non-U.S. bonus track.

Try This was Pink's final studio album under Arista Records. In 2006, Pink said that she was unhappy with the way the label wanted her to make an album after the success of M!ssundaztood. "I was kind of rebelling against the label on that one," she said. "I was going: 'You want a record? Fine, I'll write 10 songs in a week for your fuckin' record and you can press it up and put it out.'" She described the promotional campaign for the album as "an awful time. I was walking out of half my interviews crying. I just felt they were putting a quarter in the slot to watch the monkey dance." Try This is P!nk's first album to carry a Parental Advisory warning, and therefore her first album released alongside an edited version.

User Album Review
P!nk returns with her third album and follow up to the multi-platinum success of 2001's M!ssundaztood. Try This seesP!nk officially going 'a bit Rancid' by hooking up with Tim Armstrong of the aforementioned punk rockers for some production and co-writing pleasure. She carries on the party spirit with a taster of first rate pop punk rawk, with a dash of R'n'B to get you in the mood but this time delivered on a bed of fun.
Armstrong's first serving is current single, "Trouble", a beefy blast of high-energy rock stomp. P!nk captures the vibe of the teenage anarchy to the 'T'. Try This feels like a natural progression from it's predecessor (which can only be a good thing). It will please P!nk fans with its consistency and even has it's own "Get The Party Started" in track two which becomes as infectious as Mumps after a few listens. As a single, "God Is A DJ" has the making of a floorfilling anthem. Expect to hear this blasting out of speakers soon as it'splayed to death on daytime radio.
Armstrong's work on tracks like the laid back groove of "Save My Life" and the rebellion of "Humble Neighbourhoods" provide the tastier chunks of the album. But "Waiting For Love", described by Pink as her "first proper love song", also stands out. Co-written with old pal Linda Perry it intersperses with the punk funk for a moment to take her off on a Zeppelin-esq tangent.
Love from a slightly different perspective comes when electroclash hardcore diva Peaches joins Pink on "Oh My God". A slightly sleazy and subtly dirty exploration of naughtiness - tame by Peaches standards, but rather grown up in comparison to the rest of the album but not as great as you may assume.
Pink brings in some more famous friends for "Feel Good Time" which is written by Beck and produced by William Orbit. The funky basslines and swingy guitarsmake this song a bit special.
The album has the potential to be girl power for the 21st Century and rebrand the colour pink for a new generation of women - sassy attitude, clear cut lyrics and versatile style that can sound sweet yet powerful. It should help P!ink take the next steps towards becoming a formidable female pop icon.