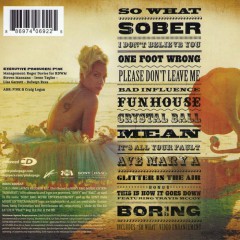 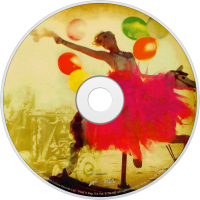 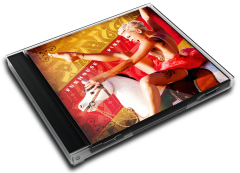 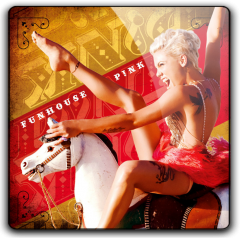 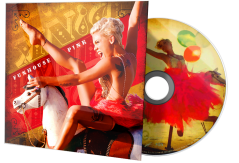 Funhouse is the fifth studio album by American singer-songwriter Pink, released by LaFace Records worldwide in October 24, 2008. The album debuted at number two on the Billboard 200 chart, selling 180,000 copies in its first week and reached number one on the charts in six countries including Australia, New Zealand, Netherlands and United Kingdom.
Singles from the album include the U.S. number-one single "So What", "Sober", "Please Don't Leave Me", "Funhouse", "I Don't Believe You", and "Glitter in the Air". Funhouse earned Pink three Grammy Award nominations and five MTV Video Music Award nominations. Funhouse was re-released in late 2009 to include a bonus DVD, and was accompanied by the release of Funhouse Tour: Live in Australia, a live album taped during Pink's Australian leg of the Funhouse Tour.

User Album Review
Don't underestimate Pink. She sells millions, on the back of her genuinely felt self-informed lyrics, sung in an un-cleared throaty voice. Her songs take you with her, whether that's praising the DJ, puking in the loos, or turning borderline alky.
Pink's mastered the pop punk sound in a way that the likes of Ashlee Simpson and Kelly Clarkson can only dream of, due, in part, to the people she works with – this album includes collaborations with Billy Mann, the guy she wrote Stupid Girls and I'm Not Dead with. But it's mainly because she pours herself into the songs with humour and grace.
Post-real life marriage split-up, she swings us round 45 minutes of joyous, out-of-control relationship breakdown, with the odd drunken diversion thrown in for good measure.
Aggressively swinging opener, So What, slams Pink's cards down on the table setting the defiant, self-deprecating tone of the album. "I guess I just lost my husband, I don't care where he went". It contains immortal lines, "I'm alright I'm fine and you’re a tool", and the video actually has the aforementioned ex-husband in there, dancing along (which could be construed as a teensy bit too knowing): so all's fair in love and promotion.
Sober, with its heavy guitars and booming snare discusses the blackouts resulting from drinking to avoid becoming those she sneers at. She admits the party's finally over, until Bad Influence, when she gets it started again: complete with circus organ, this is her L.O.V.E.-style getting-on-down-with-the-girls anthem.
The title track is a joyous, wanton destruction of a framework that no longer fits, backed by a heavy disco beat, breaking down into some blues riff with boogie woogie piano, while roadhouse rockin' Mean discusses the train wreck of her marriage, and the energy she gains from hating her partner. Likewise, It's All Your Fault trips along with cross-rhythms and little piano riff, full of regret, emptiness and rage.
The more melancholic ballads Pink insists on recording don't seem to be particularly fun for anyone, but thankfully they are in a minority here: piano based ballad Glitter In The Air is a bit of a damp squib. I'm not sure what the significance of throwing a fistful of glitter in the air is, but this wimpy attitude doesn't really fit in the celebratory dysfunctional Funhouse.