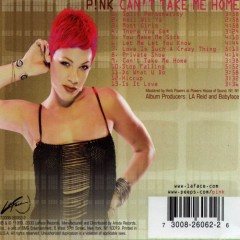 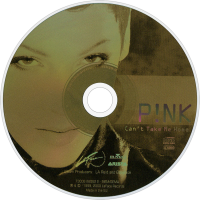 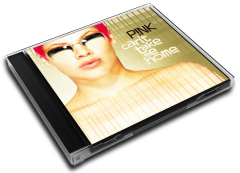 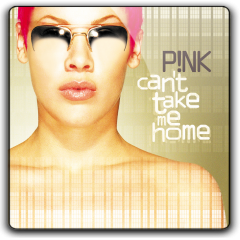 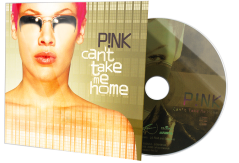 Can't Take Me Home is the debut album by singer P!nk, released in the United States on April 4, 2000 by LaFace Records. It produced three singles—"There You Go", "Most Girls", and "You Make Me Sick", and peaked at number twenty-six on the U.S. Billboard 200. Producers included Kevin "She'kspere" Briggs, Babyface, Kandi Burruss, Terence "Tramp Baby" Abney, Daryl Simmons, and Tricky. Pink shared co-writing credit on seven of the album's tracks. This album featured a contemporary R&B sound; Pink went for a more pop-rock oriented sound on her follow-up albums. She later went on to admit that during the period of promoting this album she felt stifled, as it was not reflective of her true musical ambitions.

User Album Review
Pink is twenty-year-old Alecia Moore’s hair dye of choice and, for that matter, her skin color. She’s got a dazzling, gymnastic R&B voice, without a hint of style that’s all her own. Her debut has one awesome single in “There You Go,” whose wronged-woman sass is set to a stop-start groove so bling-bling it redeems a chorus that ends, “Sometimes it be’s like that.” Beyond that, though, every melismatic groan, every clipped harmony, every post-Timbaland beat, every synth setting (like the “No Scrubs”-style harpsichord) is copped from some R&B hit of the last eighteen months. (The fiery internal dialogue of “Split Personality” would have seemed more original before Kelis’ “Caught Out There,” though.) She makes a pretty good Monica, but we already have one of those.