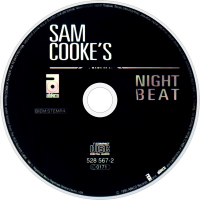 Night Beat is the twelfth studio album by American R&B, soul, and rock and roll singer and songwriter Sam Cooke. Produced by Hugo & Luigi, the album was released in August 1963 in the United States by RCA Victor.

Night Beat originated from late-night recording sessions by Cooke and a quartet of studio musicians in February 1963. It has been featured in "best-of" lists by contemporary music critics and regarded as one of Cooke's best.

The album was remastered in 2011 as a part of The RCA Albums Collection.