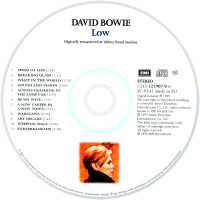 Low is the eleventh studio album by British musician David Bowie, and co-produced by Bowie and Tony Visconti. Widely regarded as one of his most influential releases, Low was the first of the "Berlin Trilogy", a series of collaborations with Brian Eno (though the album was mainly recorded in France and only mixed in West Berlin). The experimental, avant-garde style would be further explored on Heroes and Lodger. The album's working title was New Music Night and Day.

Album Review
Ok, so we all know that in the 40 years Bowie has been making music he has changed. He has changed his image, his music, his influences, his country, his friends, and his lifestyle. One thing he has always had, though, is self conviction - from the day his mother found him, aged three, putting on her make-up, through to 1992 when he confessed that he always wanted to "transgress the norm". And it was thanks to the musical experimentation of Brian Eno, the influence of bands such as Kraftwerk, Neu! and other Krautrock acts, world-weary fame; and the precision production of Tony Visconti, that Bowie was able to transgress the norm with Low. It was the first of the trio of albums that came to be known as the Berlin Trilogy along with ‘Heroes’ and Lodger.
As a young Bowie fan, I always found the first side of the album, with its sharp and easily recognisable rhythms and short cutting-edge tracks (few more than three minutes long), much more listenable to that the second, mostly instrumental side. Over the years I’ve come to appreciate the Eno atmosphere that was laid down and can see how Low with its sonic scapes might have begun life as part of the soundtrack to the film The Man Who Fell to Earth. The album is more montage than theme, though the special effects that cut through Sound and Vision chillingly reflect a drug induced breakdown. The jagged edges of Low are often attributed to the fragmentation that Bowie was suffering as a recovering cocaine addict. Self-destruction is carried through the album by the icy, mannered vocals.
Speed of Life opens the album with a jolt thanks to Ricky Gardiner's sharp guitar. The more lengthy and suspense-filled Warszawa, was used to open the 1978 and 2002 tours. It made sure that the audience were on tenterhooks until Bowie took to the stage.
With its texturing, layering and juxtaposing of random sounds and instruments, including an eventide harmonizer, Low is certainly an ambitious album and one that wasn't well-received by critics at the time. It does, however, show a Bowie who was had turned 30: a man growing up, coming into his own.
Without Low we’d have no Joy Division, no Human League, no Cabaret Voltaire, and I bet, no Arcade Fire. The legacy of Low lives on.