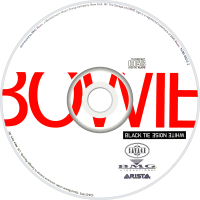 Black Tie White Noise is the eighteenth studio album by David Bowie. Released in 1993, it was his first solo release in the 1990s after spending time with his hard rock band Tin Machine, retiring his old hits on his Sound+Vision Tour, and marrying supermodel Iman Abdulmajid. This album featured his old guitarist from the Ziggy Stardust era, Mick Ronson, who died of cancer later in the year. This album was inspired by his own wedding and includes tracks such as "The Wedding" and its reprise at the end of the album as a song reflecting the occasion. The album debuted number one in the UK album charts two weeks after its release, his last #1 UK album until 2013's The Next Day.

Album Review
In 1993 there was little reason to expect that David Bowie might make a decent record. He’d just given the world, unasked, the sludgy group rock of Tin Machine, which had done nothing to cleanse the listener’s palate after his 80s solo albums, which reached their nadir with 1987’s Never Let Me Down.
But the release of Black Tie White Noise, which reunited Bowie with Nile Rodgers, changed all that. Now it seems that Tin Machine had existed solely to wipe away any memory of what Bowie himself calls his "Phil Collins albums". Job done, Bowie was now free to pick up where he’d left off with 1980’s Scary Monsters (and Super Creeps), the first of his records to actively look back over his own career and consolidate its many sounds.
Black Tie refers to many aspects of Bowie’s career. Rodgers provides a more considered sound than the crash and glitz of the pair’s previous collaboration, Let’s Dance. Mick Ronson, who’d not worked with Bowie for almost 20 years, plays on a cover of Cream’s I Feel Free, an old Spiders staple (it was sadly their last recording together, as Ronson was to die of cancer that year). Another song covered here, The Walker Brothers’ Nite Flights, is one that directly influenced Bowie’s own work with Brian Eno; and that work is also referenced in the instrumental opener The Wedding, which is named in tribute to Bowie’s wedding to model Iman Abdulmajid that year. And while the title-track (featuring rapper Al B Sure!) considered the recent LA Riots, the darkly beautiful single Jump They Say was a more personal effort, Bowie expressing his feelings concerning the death of his half-brother Terry.
All of this could have been something of a mishmash were it not for Bowie’s immense confidence (his vocals have never been better) and Rodger’s sympathetic production. As an album, it was both a critical and commercial success (number one in the UK). As a statement of the next stage of Bowie’s career, it was perfect. The 90s would be a decade of change and experimentation for David Bowie, and Black Tie White Noise was the first step on his new journey.