1.Outside: The Nathan Adler Diaries: A Hyper Cycle 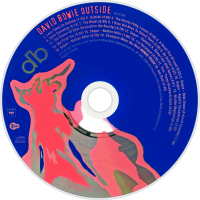 Outside is a concept album album first released 26 September 1995 by David Bowie on Virgin Records. His nineteenth studio album, it has been called "risky" but successful. The album was Bowie's "highly anticipated" reunion with Brian Eno, whom Bowie had worked with most famously on his Berlin Trilogy. Subtitled "the Ritual Art-Murder of Baby Grace Blue: A non-linear Gothic Drama Hyper-Cycle," Outside centres around the characters of a dystopian world on the eve of the 21st century. The album put Bowie back into the mainstream scene of rock music with its singles "The Hearts Filthy Lesson", "Strangers When We Meet", and "Hallo Spaceboy" (notably remixed by Pet Shop Boys).