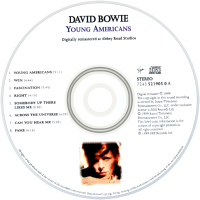 Young Americans is the ninth studio album by English musician David Bowie, released in 1975. For the record, which showed off his 1970s "obsession" with soul music, Bowie let go of the influences he had drawn from in the past, replacing them with sounds from "local dance halls", which, at the time, were blaring with "lush strings, sliding hi-hat whispers, and swanky R&B rhythms of Philadelphia Soul". Bowie is quoted describing the album as "the squashed remains of ethnic music as it survives in the age of Muzak rock, written and sung by a white limey". Because of the strong influence of black music on the album, Bowie used the term "plastic soul" (originally coined by an unknown black musician in the 1960s) to describe the sound of Young Americans. Although Bowie was an English musician bringing up touchy American issues, the album was still very successful in the United States; the album itself reached the top ten in the US, with the song "Fame" hitting the number-one spot the same year the album was released.

Album Review
Young Americans has always occupied a troublesome niche in David Bowie’s catalogue, not least because Bowie himself has changed his own opinion toward it many times in his career. The back-of-fag-packet-précis for the album is simple: rock star kills creation (Ziggy Stardust) that gives him the success he had so long craved and headed off to America to immerse himself in the music that had been his first love – R&B.
Recording at Philadelphia’s Sigma Sound studios in 1974, this album is a stylistic postcard of all the music that was absorbing Bowie at the time. Young Americans, however is not a straightforward reading of soul. As the more personal and open Bowie appears to be as he emotes throughout, the more distant he becomes. As a result of this detachment, Young Americans can be seen as, overall, slightly queer (in the old sense of the word). But how wonderfully queer it is – for example, the luscious “Can You Hear Me?”, (arguably Bowie’s greatest self-penned ballad); the widescreen aspirations of the title track; and Bowie’s finest foray into funk, “Fame”, are among his very best work.
Young Americans dabbled in all Bowie's then commonplace themes of loneliness, despair and alienation, but, because it has lite-jazz saxophonist David Sanborn and, in his first major recording session, Luther Vandross on it, it somehow comes with a permanent shrug of dismissal from serious-minded Bowiephiles who always place the album well below the Ziggy era and the Berlin trilogy. It’s well worth reappraisal, and with the bonus DVD content and the reinstatement of three bonus tracks from the early CD issue, it’s another feather in the cap for EMI’s ongoing Bowie release programme.