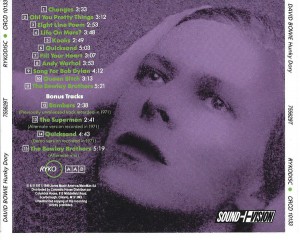 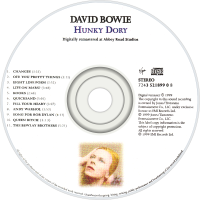 Hunky Dory is the fourth album by English singer-songwriter David Bowie, released by RCA Records in 1971. It was Bowie's first release through RCA, which would be his label for the next decade. Hunky Dory has been described by Allmusic's Stephen Thomas Erlewine as having "a kaleidoscopic array of pop styles, tied together only by Bowie's sense of vision: a sweeping, cinematic mélange of high and low art, ambiguous sexuality, kitsch, and class."

The style of the album cover was influenced by a Marlene Dietrich photo book that Bowie took with him to the photo shoot.

Album Review
Recorded at Trident Studios in July 1971, several days after his Glastonbury appearance, Hunky Dory captures David Bowie in transition from the pot-enhanced rock of The Man Who Sold The World to the grand concept of Ziggy Stardust. Produced by Ken Scott, the album is very much a songwriter’s work and finds Bowie for the first time finding his own voice after scrabbling around stylistically for best part of a decade.
In 1971, singer-songwriters were very much a la mode – in a way Hunky Dory is Bowie’s Tapestry or Madman Across The Water, albeit with themes that encompassed art, gender, other lifeforms and general strangeness. All the component parts of the Spiders From Mars are in place – Mick Ronson, Woody Woodmansey and Trevor Bolder. Although Bowie tackled some “less complicated piano parts” due to “(inability)” as he wrote on the sleeve, it is session player Rick Wakeman who gives the album its pastoral flavour.
Hunky Dory contains some of Bowie’s greatest songs. “Changes” and “Life On Mars?”, “Oh! You Pretty Things” are almost too well-known now; but to hear the scale of Bowie’s ambition is incredible. “Andy Warhol” introduced the pop-artist to many British listeners, while the fairly unrepresentative “Queen Bitch” (his tribute to Velvet Underground) points the way clearest to what was to lay ahead.
This album finally demonstrated David Bowie's enormous potential to the listening public. It became a huge hit after Bowie broke through and became a household name in 1972.