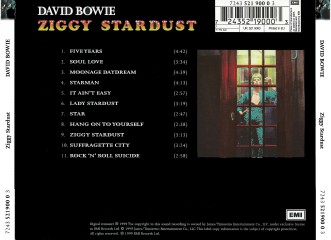 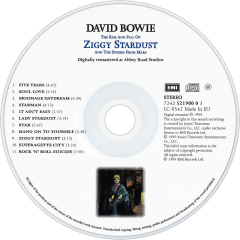 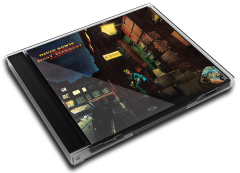 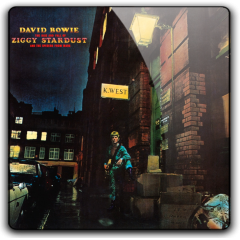 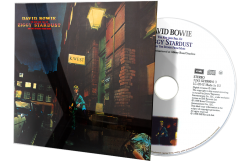 The Rise and Fall of Ziggy Stardust and the Spiders from Mars (often shortened to Ziggy Stardust) is a 1972 concept album by English musician David Bowie, which is loosely based on a story of a fictional rock star named Ziggy Stardust. It peaked at number five in the United Kingdom and number 75 in the United States on the Billboard Music Charts.

The album tells the story of Bowie's alter-ego Ziggy Stardust, an alien who visits Earth in the form of a rock star. Bowie created Ziggy Stardust while in New York City promoting Hunky Dory and performed as him on a tour of the United Kingdom, Japan and North America. The album, and the character of Ziggy Stardust, was known for its glam rock influences and themes of sexual exploration and social commentary. It has been consistently considered as one of the greatest albums of all time, with Rolling Stone ranking the record the 35th greatest ever. It was ranked the 20th greatest album ever in a 1997 British survey, the 24th greatest of all time by Q magazine and one of the 100 greatest releases ever by Time magazine.

A concert film of the same name directed by D.A. Pennebaker was released in 1973.

User Album Review
It sounds like a cliché, but to an entire generation this album has become a yardstick by which to measure all others. Why the hyperbole? Because the strength of Ziggy lies in its completeness. Not a track is out of place, in fact not a NOTE is out of place, and at just over 38 minutes it is (and this has been scientifically proven, boys and girls) the perfect length. Every R&B and Hip Hop artist in the universe take note. So, does it still stand up after 30 years? Is it a major strand in rock's rich tapestry, with its gender bending bravado and melodramatic sweep; or just an ephemeral piece of fluff about a bisexual pop star living through the apocalyptic countdown?
With its so-called classic status written in stone, a perverse logic makes you want to reassess the album in a negative light. It can't be as good as all that can it? But remember, there's a reason why all those bands have dined out on this sonic template (step forward Suede, Supergrass and countless others). Within two short years Bowie had transformed himself from fey folk wannabe into a glam icon, via a brief flirtation with heavy metal. In doing this, lest we forget, he forged the template for the truly modern pop star that has yet to be broken. How this was achieved had a lot to do with two factors.
One was his adoption of three lads from Hull as his backing band, renaming them the Spiders From Mars and thus making the wild Les Paul stylings of guitarist Mick Ronson an essential element of his sound. The second was young David''s choice of producer. Most people associate Tony Visconti (the man who gave Bolan his glam sheen and who had played on and produced the aforementioned metal album The Man Who Sold The World) with this period. It was, in fact, with his previous album Hunky Dory that DB found the perfect studio partner for this phase in his mercurial career. The pairing of Bowie with Ken Scott at Trident studios allowed him to finally nail a simple format of guitar, bass, drums and piano into the place where the New York nihilism of the Velvet Underground met a quintessentially English way with a tune and a vocal. Ziggy represents the peak of their achievement.
Having perfected the format Bowie took his greatest leap forward by taking a cycle of songs and moulding it into a loose story of the nominal Ziggy and his Christ-like rise and fall at the hands of adoring fans. It allowed Bowie to take the central role onstage, hiding behind a mask of glamorous decadence that some would say hes yet to renounce. The songs weren't bad either. The part sci fi, part demi-monde narrative unfolds via the sophisticated use of shifting perspectives, beginning with "Five Years" and its tale of despairing humanity at the brink of destruction. Ziggy is observed through the eyes of one besotted fan who, following the star's death, takes their own life in the thrilling climax of "Rock 'n' Roll Suicide". From piano-led sumptuousness ("Lady Stardust") to plain old dirty riffage ("Suffragette City") Dave was on a creative roll that would catapult him to the heights of success but ultimately lead him to destroy the Frankenstein's monster that had him and his audience confusing fantasy and reality.
So here it is, with the obligatory second disc featuring early versions by fake band Arnold Corns, demos, outtakes that most bands would kill to have as prime material (including "Velvet Goldmine": yes, the film was named after it), b-sides and one of Bowie's greatest singles, "John I'm Only Dancing". It's a worthy treatment of such an aural treasure and one can only hope that generations to come will come to love it as much as their peers. Ultimately, what Ziggy really represents is an artist who was in the right place, with the right people and the right songs at the right time. The future held plenty more surprises; but for millions this will always be the place where the world's most famous Martian truly fell to earth.