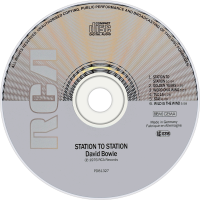 Station to Station is the tenth studio album by English musician David Bowie, released by RCA Records in 1976. Commonly regarded as one of his most significant works, Station to Station was the vehicle for Bowie's last great character, The Thin White Duke. The album was recorded after he completed shooting Nicolas Roeg's The Man Who Fell to Earth, and the cover artwork featured a still from the movie. During the sessions Bowie was heavily dependent on drugs, especially cocaine, and recalls almost nothing of the production.

Musically, Station to Station was a transitional album for Bowie, developing the funk and soul music of his previous release, Young Americans, while presenting a new direction towards synthesisers and motorik rhythms that was influenced by German electronic bands such as Kraftwerk and Neu!. This trend culminated in some of his most acclaimed work, the so-called Berlin Trilogy, recorded with Brian Eno in 1977–79. Bowie himself has said that Station to Station was "a plea to come back to Europe for me". The album’s lyrics reflected his preoccupations with Nietzsche, Aleister Crowley, mythology and religion.

With its blend of funk and Krautrock, romantic balladry and occultism, Station to Station has been described as "simultaneously one of Bowie's most accessible albums and his most impenetrable". Preceded by the single "Golden Years", it made the Top 5 in both the UK and US charts. In 2003, the album was ranked number 323 on Rolling Stone magazine's list of the 500 greatest albums of all time.

Album Review
After what Bowie labelled “plastic soul,” on Young Americans, it was more a case of lost soul for 1976’s Station to Station. The desperately thin, paranoid Bowie was still living in America but casting anxious, glassy-eyed looks across the Atlantic to European salvation – principally the musical and spiritual regeneration of Berlin.
Conflicting reports claim the album was either recorded before or after filming The Man Who Fell to Earth in New Mexico, but either way both album and film feature heavy themes of alienation, loss of control, madness and addiction (in his alien character’s case, alcohol; in Bowie’s, cocaine). Musically, it’s similarly intense, even more so because Bowie claims he can’t remember making it. It’s also one of his greatest records, bridging the stations of US R&B and krautrock – a sound bleached of blues but rooted in the motorik rhythm of Neu! and Kraftwerk – and of its six track, four are certified tour de forces.
The ten-minute title-track is first. A train gathering speed whizzes from speaker to speaker before a slow, clanking instrumental incline toward Bowie’s (ever-deeper) vocal intro, and his most dramatic lyrical entrance: “The return of the thin white duke / throwing darts in lover’s eyes.” The Duke – Bowie’s last distinct character – resembles a Nietzsche superman obsessed with belief – Judaism, Christianity, the occult – and totally off the rails: “It’s not the side effect of the cocaine, I’m thinking that it must be love.” The second section is a gallop, Earl Slick’s snarling solo unfurling over Roy Bittan’s barrelhouse piano.
The elegiac aftermath Golden Years distils and bakes Young Americans’ finger-snapping soul-funk canon; TVC15 is the other pop nugget, a more jovial saga of (according to Bowie) a girl in love with her TV. In between, Word on a Wing is a simmering plea for help to an angel but it’s outdone for gorgeous, fearless melodrama by Wild is the Wind (the title-track of a 1957 film, made famous by Nina Simone) as the Duke/Bowie hits an emotional all-time low. Stay is equally desperate, but the music is an all-time Bowie high, watertight rock-funk behind more naked confessionals from the man usually behind a mask.
The five-CD Super Deluxe Edition features additional album mixes and single versions, but the three-disc Special Edition is the essential purchase, involving the twofer Nassau Coliseum concert, aka the Thin White Duke bootleg, where Station cuts come to life and old classics are either invigorated (a rampant The Jean Genie, an awesome Five Years) or badly clobbered (especially Suffragette City and Queen Bitch). The band couldn’t truly rock, but then Bowie wasn’t interested in rock; he was rolling toward another sound and vision, the Berlin trilogy.