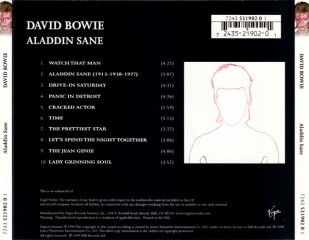 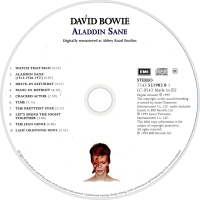 Aladdin Sane is the sixth album by David Bowie, released by RCA Records in 1973 (see 1973 in music). The follow-up to his breakthrough The Rise and Fall of Ziggy Stardust and the Spiders from Mars, it was the first album Bowie wrote and released as a bona fide rock star. While many critics agree that it contains some of his best material, opinion as to its overall quality has often been divided. NME editors Roy Carr and Charles Shaar Murray called the album "oddly unsatisfying, considerably less than the sum of the parts", while Bowie encyclopedist Nicholas Pegg describes it as "one of the most urgent, compelling and essential" of his releases. The Rolling Stone review by Ben Gerson pronounced it "less manic than The Man Who Sold The World, and less intimate than Hunky Dory, with none of its attacks of self-doubt." It was one of six Bowie entries in Rolling Stone's list of the 500 greatest albums of all time (at #277) and ranked #77 on Pitchfork Media's Top 100 Albums of the 1970s.

Album Review
From the first crashing chord of ''Watch That Man'' you know that this is a rock'n' roll album. If Ziggy Stardust was his Sgt. Pepper (a loose-fitting concept about an alter-ego rock band, but staggeringly good songs), then Aladdin Sane is Bowie's Exile on Main Street and, as if to prove a point, there's even a cover of a Stones song on here: the staunch rocker ''Let's Spend the Night Together''.
The riffs come thick and fast. Mick Ronson might lack Keith Richards' blues licks - he plays guitar like a Hull mechanic, which was pretty much what he was when he joined the Spiders from Mars - but boy, can he play. Listen to ''Jean Genie'', ''Cracked Actor'' and ''Panic In Detroit''. Ronson's six-string shuffle turns his guitar's sound into something that chases you with teeth.
Bowie described this album as 'Ziggy in America', and the rock'n' roll is certainly more down to earth than its predecessor, with the notable exception of the space-age ''Drive in Saturday'', the other-worldly ''Lady Grinning Soul'' and ''Time'', with its echoes of pre-war Berlin cabaret neatly prefiguring Bowie's own sojourn in that city in the later Seventies. Mott the Hoople turned down ''Drive in Saturday'' as a follow up to ''All the Young Dudes'', which was a shame perhaps, but Bowie's recording is wonderfully atmospheric, and it is difficult to imagine anyone else capturing that languid 'Gee it's hot, let's go to bed' feel in quite the same way. 'Pour me out another phone', he sighs, before name-checking Twiggy and someone called Buddy.
Pianist Mike Garson is consistently great throughout this album, and an important adjunct to the Bowie house-band. His weary, decadent piano - put to particular good use on the title track -''Aladdin Sane (1913-1938-197?)'' - was one of the album's talking points when it was first released in 1973. It's lost none of its freeform, jazzy sparkle in thirty years and still sounds as Jackson Pollock's blobs might, had they been splattered onto sheet music instead of canvas.
The bonus disc accompanying this 30th anniversary pressing comprises four relatively interesting tracks - Bowie's own 1973 recording of ''All the Young Dudes'', a sax version of his 1972 hit, ''John, Im Only Dancing'', and the single mixes of ''Time'' and ''Jean Genie'' - and various live out-takes from American gigs of the Seventies.
Aladdin Sane is one of the finest forty-five minutes in rock. 'Crack, baby, crack; show me you're real' he demands on ''Cracked Actor'': a chameleon lost, for one glorious moment, in his own camouflage.