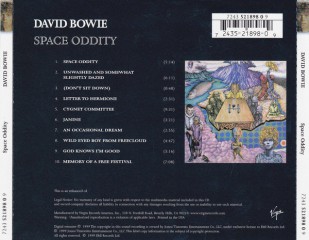 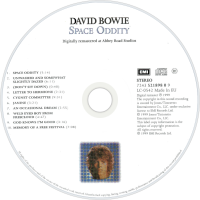 David Bowie is a 1969 album by rock musician David Bowie, released under that title by Philips in the UK, and by Mercury in the U.S. as Man of Words/Man of Music. It was later rereleased by RCA as Space Oddity but reverted to the original, eponymous, title for a 2009 reissue. Regarding its mix of folk, balladry and prog rock, NME editors Roy Carr and Charles Shaar Murray have said, "Some of it belonged in '67 and some of it in '72, but in 1969 it all seemed vastly incongruous. Basically, David Bowie can be viewed in retrospect as all that Bowie had been and a little of what he would become, all jumbled up and fighting for control..."

Album Review
There has always been more to Bowie’s second album than that prescient, if over-familiar, title song, as this two-disc re-mastered edition proves.
In 1969 it was released in the UK as David Bowie and in the US as Man of Words/Man of Music. Three years later, with Ziggy-mania abounding, it was re-issued with an even more pragmatic name, and soared to, um, number 17. Generations of Bowie fans have thus always perceived it as an afterthought, a pallid sibling to the golden run which followed, a runt which spawned one cosmic hit and was padded out with hippie folk songs.
How wrong you can be. It sounds extraordinary today, so flecked with genius that the wonder is not that Bowie broke big afterwards but that he didn’t sooner. Perhaps the last great 60s album, with shades of prog and sprinkles of Sgt. Pepper’s, it’s an elegy to that decade’s corroding ideals. The climactic Memory of a Free Festival perfectly captures the desire for escape from society’s shackles that coloured the times yet also seems smart enough to mock itself, knowing that bliss is, as he puts it in another lovely ballad, An Occasional Dream. In this blend of abandonment and self-awareness lay Bowie’s genius (a blend which later culminated in Young Americans, both completely fabricated and completely soulful). He never accepted that the textbook doesn’t allow you to be simultaneously arch and angst-ridden, and his innate ambivalence fuelled songs which proudly endure.
Gus Dudgeon produced the title track; Tony Visconti, who tackled the rest, had rejected it as “gimmicky”, then brought in a 50-piece orchestra for Wild Eyed Boy From Freecloud. On Unwashed and Somewhat Slightly Dazed, bluesy rock hits places it didn’t previously know existed. Bowie hadn’t yet learned to self-edit, so you get guttural struts like “I’m a phallus in pigtails”, but also yearning sighs of “don’t turn your nose up / well you can if you want to, you won’t be the first or last”. There are inspired torch songs, then Cygnet Committee – a bold, ten-minute rant against Vietnam-era platitudes. It’s a dark horse in the Bowie canon: a simmering contender for his masterpiece.
The second CD gives us demos and sessions: the wry, pithy Janine, alternate mixes of the epics, and an Italian version of Space Oddity (titled Ragazzo Solo, Ragazza Sola) which coaxes awe from absurdity. His next trick was to wow the crowd, but this intricate, intriguing work should never again be underestimated.