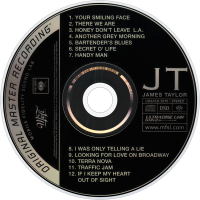 JT is the eighth studio album by American singer-songwriter James Taylor. It was released on June 22, 1977 via Columbia Records, making it his first album released for the label. Recording session took place from March 15 to April 24, 1977 at The Sound Factory in Los Angeles with Val Garay. Production was handled by Peter Asher.

The album peaked at number 4 on the Billboard 200 albums chart in the United States and was Taylor's highest-charting album since Mud Slide Slim and the Blue Horizon. By January 31, 1997, it was certified 3 times Platinum by the Recording Industry Association of America. At the 20th Annual Grammy Awards, it was also nominated for Grammy Award for Album of the Year, but lost to Rumours by Fleetwood Mac.

The album spawned four singles: "Bartender's Blues", "Handy Man", "Your Smiling Face" and "Honey Don't Leave L.A.". "Handy Man", a Jimmy Jones cover, peaked at #4 on the Billboard Hot 100 and topped the Adult Contemporary and won the Grammy Award for Best Male Pop Vocal Performance. "Your Smiling Face", the other big hit, peaked at #20 on the Billboard Hot 100 and #6 on the Adult Contemporary chart. The record also contains other Taylor classics such as "Secret O' Life" and "Terra Nova", with the participation of Taylor's then-wife Carly Simon.
(Wikipedia)