03) Nothing Can Come Between Us 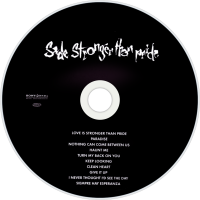 Stronger Than Pride is the third studio album by the English group Sade. It was released in the United Kingdom on 14 May 1988 and in the United States on 4 June 1988 by Epic Records.

Album Review
After the positive rush of 1984’s Diamond Life and the following year’s Promise, Sade – bassist Paul S. Denman, keyboardist Andrew Hale, guitarist Stewart Matthewman and vocalist Sade Adu – established their leisurely pace of releases with Stronger Than Pride in 1988. Theirs is a release schedule so sporadic that it has, to date, only produced another three studio albums. Recorded in France and the Bahamas, Stronger Than Pride is the sound of money and time. Unlike their peers, the group continued doing the same thing; there were no power ballads or all-out attempts at chart glory. It was similar to their previous work in the best way possible, relying on nuances and subtle modifications of their sound. The only thing the album has in common with other releases of the time is that it had a little of the in-era trickery: a sampled flute here, a bit of Fairlight there. Yet it still manages to sound fully organic.

The album has only two speeds: mid-tempo funkers such as Turn My Back on You, Paradise and Nothing Can Come Between Us, or delicate ballads such as the title track, Haunt Me and the affecting I Never Thought I’d See the Day. Some numbers are simply grooves with repeated choruses rather than conventional songs, yet it all works. Listen to Clean Heart and it’s obvious why America took Sade so fully to their hearts; it could almost be a Christine McVie-penned Fleetwood Mac song. Adu’s voice is so ambient that it almost becomes another instrument. In fact, for someone who was such a seductive star (and who made the group), it’s hard at times to locate her on the album at all. Her vocals are often dispatched in seductive repetitive whispers, and then, she’s gone – yet her presence dominates the work. By the final track, Siempre Hay Esperanza, she absents herself entirely from the languid instrumental. Stronger Than Pride was a confident, post-fame release, full of infectious, hushed musical sophistication, making it impossible to dislike. It would be another four years before the world heard from Sade again, but Stronger Than Pride ensured they retained their place as mysterious million sellers.