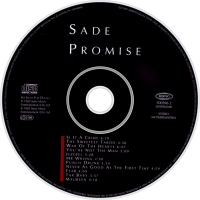 The major hits from this album were "The Sweetest Taboo" and "Never as Good as the First Time", which reached number five and number 20 on the U.S. Billboard Hot 100, respectively. Also, "Is It a Crime" was released as a single. While not as initially successful as their debut album, Diamond Life, Promise became the band's first album to top the albums chart in both the United Kingdom and the United States, helped by an appearance at Live Aid and a cameo in the film Absolute Beginners.

The title Promise comes from a letter from Sade Adu's father where he refers to the "promise of hope" to recover from cancer.