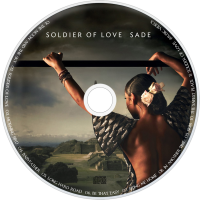 Soldier of Love is the sixth studio album by the English group Sade. It is their first album of original material since Lovers Rock (2000). The album was initially released on 5 February 2010 in Germany, and it was released worldwide on 8 February 2010 and in the United States on 9 February 2010. The first single "Soldier of Love" premiered on 8 December 2009 on the group's official website.

Album Review
She’s a virtual recluse, refuses to give interviews, and releases albums rarely: in some ways, Sade is the Kate Bush of mellow soul, or M.O.RnB if you will. Soldier of Love is her first album since 2000’s Lovers Rock, and it is hardly less feverishly anticipated than Bush’s last opus, maybe more so in America, where she has a better rep – in Britain she is often dismissed as dinner party jazzy soul muzak. Immaculately produced, Sade’s albums to date have oozed class and sophistication, although seemingly offering variations on a single theme. But such consistency of tone is deceptive. It would be easy, and wrong, to accuse Sade of sterility and concealing feelings beneath a veneer of unflappable hauteur. Scrutiny of her work reveals moments of serene candour and breathtaking intimacy – I Never Thought I’d See the Day, her best song, from 1988’s Stronger Than Pride, has plenty in common with Portishead.

Unfortunately, there’s nothing quite that unexpected on Soldier of Love. In fact, just when it seemed like the ideal opportunity to proclaim her a musician of rare idiosyncratic wonder, she delivers an album that denies a passionate response. Recorded with the old team of Stuart Matthewman, Paul Denman and Andrew Hale at Peter Gabriel’s Real World studio, this sixth album illustrates the dilemma of the long-term artist: whether to alienate fans with a radical departure or risk the charge of repetition. The title song is the least Sade-like track here – with its metallic, shiny martial beat not far from trip hop/Tricky territory, it’s the toughest-sounding thing she’s ever done, though the lyric posits the idea of the relationship as battleground, a notion as predictable as the chord sequence. Sade was always better as a mood creator than philosopher, but even so banal couplets abound. “It couldn’t be that easy / It had to be much harder,” she trills on Be That Easy, a foray into spectral country.

There is gospel organ (Be That Easy) and a mid-tempo reggae-ish gait on Babyfather, but mostly Soldier of Love is as mournfully one-paced as previous Sade albums, with the same attention to texture and surface lustre but, alas, not to melody or moving autobiography. This could have been the grown-up Back to Black, as ravishing and revelatory as Winehouse’s great achievement. But instead it finds Sade keeping her distance and retaining her mystique, apparently more for her benefit than ours.