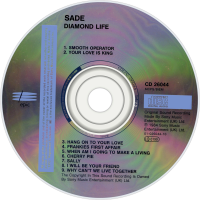 Diamond Life is the debut album by the English group Sade. It was released in the United Kingdom on 16 July 1984 by Epic Records, and in the United States on 23 February 1985 by Portrait Records. Released in the wake of Sade's two hit singles "Your Love Is King" and "When Am I Going to Make a Living", the album was an instant hit in the UK, peaking at #2 and spending over six months in the Top Ten. The album also reached #5 in the US, and was also highly successful in The Netherlands, Germany, Switzerland and Austria, where it reached number one.

The album won the Brit Award for Best British Album in 1985.

Album Review
Sade the band emerged in the early-80s out of London’s short-lived New Jazz scene, one that also included Animal Nightlife and Weekend; it was the logical mellow next step after the frenetic white funk of Blue Rondo a la Turk, Spandau Ballet, Funkapolitan et al. And Sade the singer was a former model and fashion maven who first came to prominence as éminence grise of style bible the Face. She seemed destined for stardom, even if nobody was quite sure she would achieve it via music. Sade’s debut album, Diamond Life, confirmed that she was more than just a beautifully sculpted face. For a start, she could sing, although instead of the ostentatious melismas we’ve become accustomed to from soul singers these days, Sade’s voice was husky and restrained, oozing class and suggestive of hard-won experience, making her sound like a Wardour Street Billie Holiday.

And she could write songs to match, songs that were sufficiently soulful and jazzy yet poppy, funky yet easy listening, to appeal to fans of all those genres. Smokey Robinson coined the term “quiet storm” to describe a certain kind of mellifluous R&B back in the mid-70s, and the four-times-platinum Diamond Life, which won the BRIT Award for Best Album in 1985, and its attendant four singles, helped give that gently turbulent music a wide, even international audience. It reached number five in the States, where Sade continues to exert a tremendous fascination with her uniquely British take on US black music idioms. At first listen, it could be confused with supperclub muzak. Your Love Is King, the first single in the UK, flattered to deceive with its sax refrain and gossamer rhythms, but there was a melancholy beneath the surface that snagged. Smooth Operator, too, was almost as slick as the titular ladykiller. But there was a sense of desperation about Hang on to Your Love, while When Am I Going to Make a Living reeked of Thatcher-era hard times, even if the music was expensive and sleek. These four tracks were all singles, but the beauty of Diamond Life is that four more of the total nine could easily have been lifted off for release, especially Frankie’s First Affair, I Will Be Your Friend and Sally, which helped posit Diamond Life as the missing link between torch ballads and trip hop.