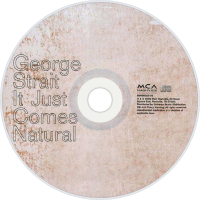 It Just Comes Natural is the twenty-fourth studio album from country music singer George Strait. The album produced Strait's 41st Number One Billboard Hot Country Songs) hit in its lead-off single "Give It Away". Also released from this album were the title track (also #1 on Hot Country Songs), "Wrapped" (#2), and "How 'Bout Them Cowgirls" (#3). The album itself has been certified platinum by the RIAA. "It Just Comes Natural" was nominated for Best Country Album at the 2008 Grammy Awards.