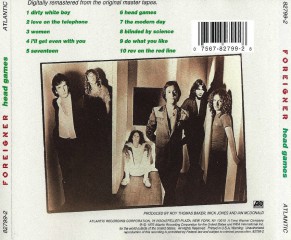 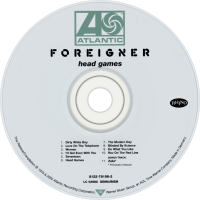 Head Games is the third studio album by Anglo American rock band Foreigner, released in 1979. It charted at #5 on the Billboard 200 chart, and has sold over five million copies in the US alone. The album is perhaps as famous (or infamous) for its album cover - depicting a worried young woman (portrayed by actress Lisanne Falk) in a men's restroom - as it is for its music. The title track and "Dirty White Boy" were the album's big hits, peaking at #14 and #12, respectively. This was the album in which Rick Wills replaced Ed Gagliardi as bassist. It was the band's only album produced by Roy Thomas Baker, best known for producing Queen's classic albums.