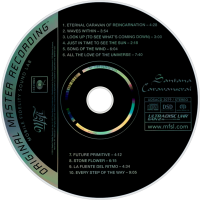 Caravanserai is the fourth studio album by Santana released in October 1972. It marked a major turning point in Carlos Santana's career as it was a sharp departure from his critically acclaimed first three albums. Original bassist David Brown left the group in 1971 and was replaced by Doug Rauch and Tom Rutley, while original percussionist Michael Carabello left and was replaced by Armando Peraza. Keyboardist/vocalist Gregg Rolie, who was having a falling-out with Santana, was replaced by Tom Coster on a few songs. Caravanserai reached the top 10 of the Billboard 200 chart in 1972.
The sound contrasted greatly with Santana's trademark fusion of salsa, rock, and jazz, and concentrated mostly on jazz-like instrumental passages. All but three tracks were instrumentals, and consequently the album yielded no hit singles. The album is the first among a series of Santana albums that were known for their increasing musical complexity, marking a move away from the popular rock format of the early Santana albums towards a more contemplative and experimental jazz sound. While Caravanserai is regarded as an artistic success, the musical changes that began on its release in 1972 marked the start of a slide in Santana's commercial popularity.
It was the last Santana album to feature Gregg Rolie and Neal Schon, who went on to form Journey the following year.
In 1998 SME records in Japan, part of Sony Music, also released the remastered version as an SACD. This disc is stereo only, and furthermore, it is a single layer SACD, which means that ordinary CD players will not play it.
The album was remastered in 2003 for Columbia Legacy.