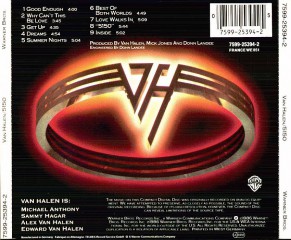 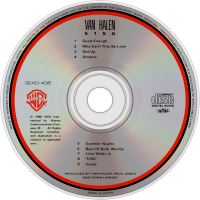 5150 (pronounced "fifty-one-fifty") is the seventh studio album by American hard rock band Van Halen, released in 1986 on Warner Bros. Records. It was the first to be recorded with new lead singer Sammy Hagar, who replaced David Lee Roth.

It was named after Eddie Van Halen's home studio, 5150, which is a California police term for a mentally disturbed person (a reference to Section 5150 of the California Welfare and Institutions Code). The 5150 name has been used several times by Van Halen. It is the name of a custom Frankenstein-striped Kramer Pacer Special electric guitar used by Eddie throughout the 1980s, and the model name of the Peavey 5150 amplifier (later the 6505) and since 2004 the signature guitar amplifier endorsed by him for his own EVH brand. The album hit #1 on the Billboard 200 chart, surpassing the band's previous album, 1984, which had peaked at #2 as Michael Jackson's Thriller album, on which Eddie made a guest appearance, dominated the charts.

Before the album was released, Van Halen had considerable difficulty finding a replacement for the popular David Lee Roth. To make matters worse, Warner Bros. Records advised them to discontinue the Van Halen name; in the beginning of 1986, Eddie and Alex Van Halen formally refused. The trio even considered a series of temporary singers to replace him, including Patty Smyth and Jimmy Barnes. However in July 1985, Eddie met former Montrose singer Sammy Hagar while getting a mechanic to work on his Lamborghini. The pair hit it off and the new singer and band immediately began work on new songs.

Van Halen went to work on the album in November 1985; it would be finished in February 1986, just one month before its release.

The album was notable for a number of love songs and ballads, which were not a feature of the straightforward rock stylings of the Roth-fronted era of the band. Many who had heard the previous incarnation of Van Halen called the new iteration "Van Hagar" either derisively or affectionately, a nickname widespread enough that, as Hagar points out in his book, Warner Bros. asked them to consider renaming the band as such. Further increasing criticism was the loss of Ted Templeman, who, having produced every previous album for the band, left in order to produce Roth's solo LP debut, Eat 'Em and Smile. Templeman would return to produce Van Halen's For Unlawful Carnal Knowledge album a few years later. Donn Landee took over producer duties for 5150 after having served as an engineer on the previous albums. However, many noticed that the production on this album was markedly different from their earlier albums with Templeman. Eddie's guitar, which previously sat high in the mix and frequently pushed to the left channel (to simulate a "live" sound"), now sat equal in the mix and its overall sound had changed. This may have been his doing, as he was not a fan of the "live mix" that Templeman created with the Roth band. This is also the first Van Halen album not to feature any instrumental tracks.

Foreigner guitarist Mick Jones was also brought in as a producer, after Warner Bros. denied the band full creative latitude. According to Jones, the Van Halen brothers were "going through a particularly charged emotional relationship at the time, and there were some crazy situations that went on there." Jones feels that his biggest contribution to the album was working with Hagar on his dynamic vocal performances.

To further introduce the new era for the band, a new Van Halen logo was introduced on the cover of the album. The new icon retained the VH of the original logo, but now it had curved, rather than straight, "wings".

Despite the controversy associated with replacing a legendary frontman, the album itself was the first album by the band to hit #1 in sales. Although each prior Van Halen album had gone platinum, the band had not managed previously to top the album sales chart. The 1984 album certainly had the sales and momentum to do so but had the unfortunate timing of being released when Michael Jackson's Thriller album, the best-selling album of all time, was at its commercial peak. The album was also Hagar's first #1 album, as stated by him on the "Live Without a Net" concert video.

A live video was created during the tour for this album, which was released as Van Halen - Live Without a Net, which is today available on DVD. The tour itself was a significant change from previous tours. Where Van Halen had previously had years of material to work with, even on tour supporting the first album, Hagar was uncomfortable performing a number of Van Halen's Roth-penned hits. Therefore, almost all of the band's back catalog was dropped from the setlists. Instead, the band's live shows consisted almost the entire 5150 tracklist, a few Hagar solo hits ("I Can't Drive 55", and "There's Only One Way to Rock") and assorted covers (such as Robert Palmer's "Addicted to Love" and Led Zeppelin's "Rock and Roll"). The only Roth-era hits commonly performed were "Jump" (the band's lone #1 Billboard Hot 100 single), "Panama" and "Ain't Talkin' 'Bout Love", although "You Really Got Me", originally by The Kinks and the band's first single in the Roth era, was also done. However, unlike Roth, Hagar was a technically proficient lead guitarist and this allowed Eddie to display his talents on keyboards live while Hagar played the guitar parts, as seen in the "LWAN" video during "Why Can't This Be Love" and "Love Walks In".

The opening song "Good Enough" can be heard in the movie Spaceballs.