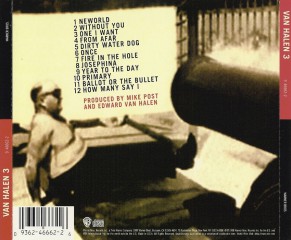 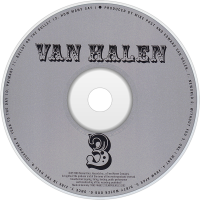 Van Halen III is the eleventh studio album by American hard rock band Van Halen, released on March 17, 1998 on Warner Bros. Produced by Mike Post and Eddie Van Halen, it is the band's only studio album to feature lead vocalist Gary Cherone, and the last to feature bassist Michael Anthony before he left the band in 2006. Work on a follow-up album with Cherone was begun during 1999, but never advanced past a few demos.

Van Halen III was the band's last album for nearly a decade and a half, and their final album of the 20th century. It was also the final album the band released on Warner Bros. When they returned in 2012 with A Different Kind of Truth, it would be with Interscope Records.

The album's title refers to the fact that it was Van Halen's third recorded line-up, and the band's first two albums having been titled Van Halen and Van Halen II. Exactly no songs from it are featured on The Best of Both Worlds, the band's 2004 greatest hits compilation.

The album's only significant radio hit was "Without You", which reached #1 on the Mainstream Rock Tracks chart on the March 7, 1998 issue of Billboard, and remained there for six weeks. Other songs receiving airplay on rock radio were "Fire in the Hole" and "One I Want". The album's final song, "How Many Say I", was an unusual acoustic piano ballad featuring Eddie on lead vocals with Cherone on backing vocals.

Another song entitled "That's Why I Love You" was dropped at the last minute in favor of "Josephina". This album also contributed the song "Fire in the Hole" to the Lethal Weapon 4 movie soundtrack.

After Michael Anthony's departure from Van Halen, he was asked whether or not it was true Eddie Van Halen dictated to him how to play bass on this record and Anthony confirmed this was true. He said by the time of making this album, Eddie was playing the bass more as well as some drums. "I don't know if Eddie was basically making a solo record, which is what Van Halen III seemed like to me."[