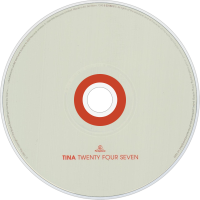 The album is actually credited to just Tina, and no one has earned the right to a single moniker more than the former Mrs. Turner. Now over 60, Tina has picked a suite of songs about survival, a topic she knows well, and imbued them with as much soul as she can muster. Tina still puts Mariah Carey and Celine Dion to shame. But unfortunately, on Twenty Four Seven, the famous Turner passion is often submerged in glossy production that virtually defines "adult contemporary." In some transcendent moments, Tina reminds us of the woman who sang "River Deep, Mountain High" -- like when she spits out "I've never been a winner but I still play the game" in "All the Woman," or during the powerful coda to "I Will Be There." As Tina sings in "Absolutely Nothing's Changed," she's lived to fight another day, and that's proof she ain't been broken.