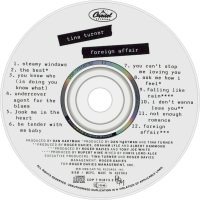 Turner's last studio album for Capitol was produced by the late Dan Hartman of "Instant Replay" disco fame; however, this was not a retro '70s-style album. This set was comprised of 12 mature, middle-range, adult rock and pop songs. Turner tackled rock on "Steamy Windows" and "The Best," the latter a universal hit. She created fine club tracks such as "Falling Like Rain," "I Don't Wanna Lose You," and "Look Me in the Heart." Still, she cooled down long enough for a couple of gutbucket ballads in "Be Tender With Me Baby" and "Ask Me How I Feel." The most interesting cut was the scorching return to Turner's Delta roots on the flawless "Undercover Agent for the Blues," one of the finest pop-blues performances since B.B. King's "The Thrill Is Gone." Despite the slight musical style variations, the whole project was wrapped in an enticing pop style that gave it buoyancy and synthesis.