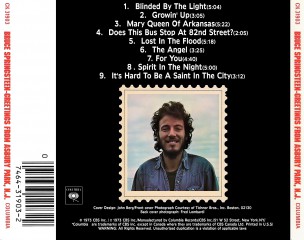 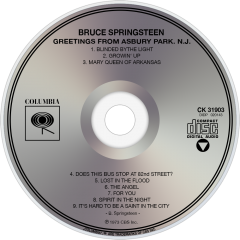 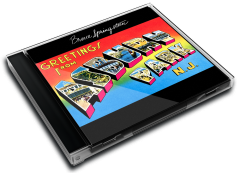 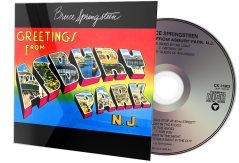 Springsteen's unbreakable bond with his hometown is reflected in the title of his first studio album. It was recorded on a shoestring budget in less than a week. The album established what would become a long recording/touring partnership with the musicians who would come to be known as the E Street Band. The initial reaction from critics, radio stations and album buyers was lukewarm at best (just 25,000 copies were sold in the year after its release) but 30 years after its release it was included on Rolling Stone magazine's list of the 500 Greatest Albums Of All Time.

User Album Review
Hailed early on by Columbia producer and talent scout John Hammond as "the new Dylan", Bruce Springsteen has always shared many of the folky, poetic, word-savvy tendencies of his hero and predecessor. Nowhere is this more evident than on Springsteen's debut, GREETINGS FROM ASBURY PARK, NJ, which veritably bursts at the seams with lyrical invention, pell-mell imagery, and acoustic-guitar driven troubadour tunes.
Yet Springsteen trades in on Dylan's pensive and bitter sides for dew-eyed optimism and exuberance. While there is spare, folkie fare like "The Angel" and "Mary Queen Of Arkansas", on which Springsteen sings of his local New Jersey colour in his uniquely passionate voice, there is also something fresh and irrepressible here. A rock & roll heart beats at the centre of GREETINGS, with a spunk and spirit that push the whole affair along.
"It's Hard To Be A Saint In The City" and "Growin' Up" are fueled by David Sancious's rollicking piano, wailing tenor sax, and Springsteen's husky voice. Together these elements defined a James Dean rebel persona and a giant rock & roll ambition that would guide Springsteen's music for the rest of his career.