We Shall Overcome: The Seeger Sessions 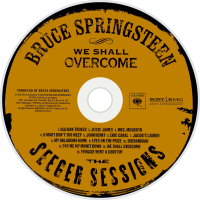 We Shall Overcome: The Seeger Sessions, released in 2006, is the fourteenth studio album by Bruce Springsteen.
This is Springsteen's first and so far only album of non-Springsteen material and contains his interpretation of thirteen folk music songs made popular by activist folk musician Pete Seeger. As an activist and artist of folk music, Seeger did not write any of the songs on the album. His life's work focused on popularizing and promoting the ethic of local, historical musical influences and recognizing the cultural significance of which folk music embodies.
The record began in 1997, when Springsteen recorded "We Shall Overcome" for the Where Have All the Flowers Gone: the Songs of Pete Seeger tribute album, released the following year. Springsteen had not known much about Seeger given his rock and roll upbringing and orientation, and proceeded to investigate and listen to his music. While playing them in his house, his 10-year-old daughter said, "Hey, that sounds like fun," which caused Springsteen to get interested in further exploring the material and genre.
Via Soozie Tyrell, the violinist in the E Street Band, Springsteen hooked up with a group of lesser-known musicians from New Jersey and New York, and they recorded in an informal, large band setting in Springsteen's New Jersey farm. In addition to Tyrell, previous Springsteen associates The Miami Horns as well as wife Patti Scialfa augmented the proceedings. This group would become The Sessions Band.
The album was Springsteen's second consecutive non-E Street Band, non-rock music project. The critical reception to the album was very positive, with E! Online calling it his "best album since Nebraska and Allmusic labeling it "rambunctious, freewheeling, [and] positively joyous". PopMatters called it a "a sonic transfusion on the order of the Mermaid Avenue records", which were Woody Guthrie songs recorded by Billy Bragg and Wilco. Seeger himself was pleased by result, saying "It was a great honor. He's an extraordinary person, as well as an extraordinary singer."
The album, like its predecessor Devils and Dust, has been released on DualDisc, in a CD/DVD double disc set, and as a set of two vinyl records.
For the DualDisc and CD/DVD sets, the full album is on the CD(-side), while the DVD(-side) side features a PCM Stereo version of the album and a short film about the making and recording of the album. Two bonus songs also appear on the DVD(-side).
The subsequent Bruce Springsteen with The Seeger Sessions Band Tour took this musical approach even further.
On October 3, 2006, the album was reissued as We Shall Overcome: The Seeger Sessions - American Land Edition with five additional tracks (the two bonus tracks from before and three new numbers that had been introduced and heavily featured on the tour), new videos, an expanded documentary and liner notes. Rather than a DualDisc release, the American Land Edition was released with separate CD and DVDs. Added sales were minimal.
The album won the Grammy Award for Best Traditional Folk Album at the 49th Grammy Awards held in February 2007.
The album had sold 700,000 copies in the United States by January 2009; the RIAA certified it with gold record status.

User Album Review
It's doubtful that any Bruce Springsteen fan ever expected they'd buy an album on which The Boss sings that primary school favourite ''Froggie Went a Courtin'''. Yet, on this lively new album, he covers the amphibian sing-along as well as 12 other tunes popularised by the American folk legend, Pete Seeger.
Springsteen and his fantastic band largely favour folk standards and spirituals over the political songs that got the Communist Seeger blacklisted in the 1950s. Recorded live in the living room of Springsteen's New Jersey farmhouse, it's very much in the spirit of Bob Dylan's Basement Tapes or The Nitty Gritty Dirt Band's classic Will The Circle Be Unbroken - a fine example of a contemporary artist taking great delight in collaborating with crack musicians and mining his country's songwriting past.
The album bristles with the sound of fiddles, banjo, accordion, pump organ, horns and Bruce's boozed-up hollers to the band. All of which can be seen on the 30 minute DVD that complements the album.
It's a long way from Born To Run but, in its own foot-tappin' way, no less exhilarating.