04) Working on the Highway 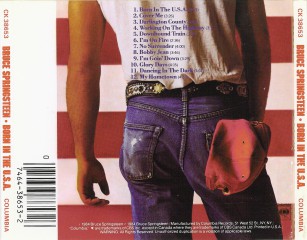 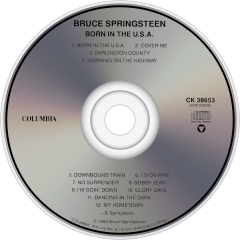 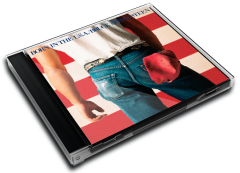 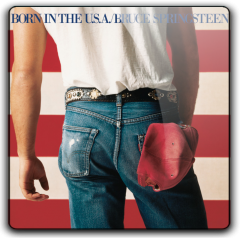 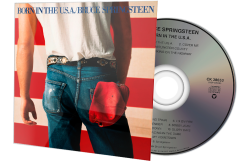 Born in the U.S.A. is the seventh studio album by American rock singer-songwriter Bruce Springsteen, released on June 4, 1984. A critical and commercial triumph, it found Springsteen marking a departure in his sound. While the predecessor, the dark and acoustic Nebraska featured songs of pessimism and isolation, Born in the U.S.A.'s lyrics expressed signs of hope in the daily fight of the ordinary American in following the American Dream, a new feeling complemented by synthesized arrangements and a pop-flavored, radio-oriented sound that helped Springsteen to extend his popularity and appeal to mainstream audiences. The album was supported by an enormous commercial campaign that helped create several hit singles, as well as remixes and music videos.
Born in the U.S.A. was the best-selling album of 1985 in the United States (and also Springsteen's most successful album ever). The album produced a record-tying string of seven Top 10 singles (tied with Michael Jackson's Thriller and Janet Jackson's Rhythm Nation 1814) and also a worldwide concert tour (the two-year Born in the U.S.A. Tour) that was a success. Apart from this hype, the album was lauded by most critics and is often considered Springsteen's magnum opus along with his 1975 breakthrough, Born to Run. The title track is often misinterpreted as a patriotic anthem. Its cover (a close-up of Springsteen's rear in front of an American flag, as he was photographed by Annie Leibovitz) became an iconic image of the era.

User Album Review
East Berlin, 1988. Under a graphite sky, a familiar synthesizer riff echoes out over a vast arena. As a thundercrack snare drum underscores one of the most consistently spine-chilling intros ever, Bruce Springsteen, telecaster in hand, stares out toward half a million East Germans who've all started singing the chorus - before he's even begun the first verse.
500,000 Germans shouting "Born In The USA" in some huge-ass park in the late-eighties is plainly quite weird. But they're not American. They're not singing about being American, are they? Are they??
"Born In The USA", the title track of The Boss' mega-selling 1984 album, was much misunderstood. Accused at the same time of being repulsively nationalistic, and viciously Anti-American, the track was endorsed by conservative US politicians (including Ronald Reagan) as an exemplar of "classic American values" whilst the bitter lyrics actually tell the story of disaffected Vietnam veteran, chewed up and spat out by his own country:
'I had a buddy at Khe Sahn
Fighting off the Viet Cong
They're still there, he's all gone
He had a little girl in Saigon
I got a picture of him in her arms'
Fire up YouTube and watch John Sayles' music video for the track. The killer punch comes near the end where you see the smiling veteran with a hole where his left eye should be.
Despite the poor sync between the video and audio, Springsteen's leather-clad delivery is scarily fierce. Heard alongside the visuals of Bruce spitting the hopeless verses, the song is revealed as far more than a knuckleheaded, jingoistic sing-a-long. It's a ragged-lunged hymn to long gone friends, a treacherous government, a stupid war, having no job, but f*** it, let’s shout the chorus until we cough up our lungs.
Springsteen’s much-discussed genius lies in finding the humanity in the everyday, punching it out with a grizzled kind of grandeur, and managing it dressed as Mad Max. That’s why our German friends, with their cold war blues and bad blow-dries, are singing along in their hundreds of thousands. Despite huge political and national gulfs, there are more similarities than there are differences.
The other songs on the album? Apart from the unsettling, tender "I’m On Fire", it’s familiar fare throughout, reliable rock and soul courtesy of Bruce and his band of E Street musos, with the added bonus of "Glory Days" and the irrepressible "Dancing In The Dark" chucked in too.
But at no point does it become as stupid, or as complex, as track 1.