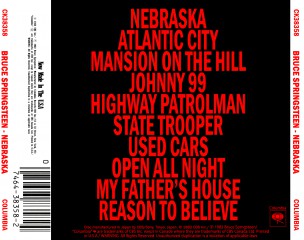 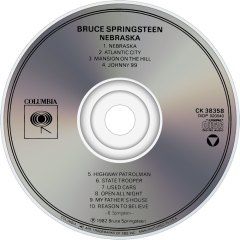 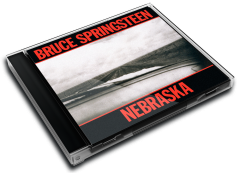 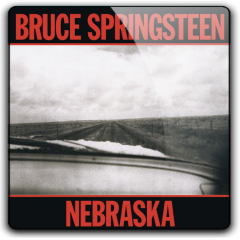 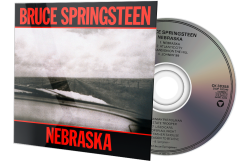 Nebraska is the sixth studio album by Bruce Springsteen, released in 1982 on Columbia Records.
Sparsely-recorded on a cassette-tape Portastudio, the tracks on Nebraska were originally intended as demos of songs to be recorded with the E Street Band. However, Springsteen ultimately decided to release the demos themselves. Nebraska remains one of the most highly-regarded albums in his catalogue. The songs on Nebraska deal with ordinary, blue collar characters who face a challenge or a turning point in their lives. Unlike his previous albums, very little salvation and grace is present within the songs.
Initially, Springsteen recorded demos for the album at his home with a 4-track cassette recorder. The demos were sparse, using only acoustic guitar, electric guitar (on "Open All Night"), harmonica, mandolin, glockenspiel, tambourine, organ and Springsteen's voice.
Springsteen then recorded the album in a studio with the E Street Band. However, he and the producers and engineers working with him felt that a raw, haunted folk essence present on the home tapes was lacking in the band treatments, and so they ultimately decided to release the demo version as the final album. Complications with mastering of the tapes ensued because of low recording volume, but the problem was overcome with sophisticated noise reduction techniques.
Springsteen fans have long speculated whether Springsteen's full-band recording of the album, nicknamed Electric Nebraska, will ever surface. In a 2006 interview, manager Jon Landau said it was unlikely and that "the right version of Nebraska came out". But in a 2010 interview with Rolling Stone, E Street Band drummer Max Weinberg praised the full band recording of the album as "killing." Somewhat different band arrangements of most of these songs were heard on the 1984-1985 Born in the U.S.A. Tour and have been played in various guises ever since.
Other songs demoed during the Nebraska sessions include "Born in the U.S.A.," "Downbound Train," "Child Bride" (later retitled "Working on the Highway"), "Pink Cadillac" and more. Some have leaked on bootlegs.

User Album Review
Bruce Springsteen’s 1982 solo album Nebraska has been called a folk album, and that’s true to an extent in both its acoustic setting and, on some of the material, in the construction of the songs. But folk songs in the traditional sense are in part defined by how they travel through culture, typically by being played in person for other people. Nebraska invites no such feeling of communion. These songs aren’t part of a shared language that people in a room might speak to each other, they are one-way transmissions from a distant, lonely place. But the signals that come through on Nebraska crackle with electricity—sometimes it’s just a hum, and sometimes it seems like a circuit is going to explode.

In early 1982, Bruce Springsteen was living in a rented house in Colts Neck, New Jersey, recuperating from a year-long tour following his 1980 double album The River. His band played 140 marathon shows and were on their way to becoming one of the biggest rock acts in the world. During this period, Springsteen tasked his guitar tech, Mike Batlan, with buying a simple tape recorder so that he could tinker with some new songs and arrangements without having to bother with renting studio time. Batlan picked up a Teac Tascam 144 Portastudio, a then-new device that was the first piece of equipment to use a standard cassette tape for multi-track recording. The new machine arrived in Springsteen’s life at the perfect moment, during what was arguably the most fruitful songwriting period in Springsteen’s long career, one that would produce enough material for two albums (1982’s Nebraska and 1984’s Born in the U.S.A.) with dozens of additional songs to spare. On it, he would craft what is still the most singular album in his catalog.

Nebraska remains an outlier for Springsteen, a record that sits uneasily in his discography. Instead of making an impact upon release, Nebraska has been accruing weight gradually over the last four decades, becoming a marker of its socioeconomic era as well as an early document of the later home-recording revolution. It stands alone partly because Springsteen didn’t tour behind it—his work is ultimately about his connection to his audience, and that connection is felt most intensely when he’s performing onstage—and partly because the record itself is kind of an accident, something that fell into place before Springsteen knew what to do with it. “I had no conscious political agenda or social theme,” he later wrote of this time in his autobiography, Born to Run. “I was after a feeling, a tone that felt like the world I’d known and still carried inside me.”