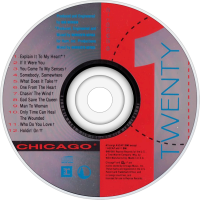 Twenty 1 is the seventeenth album by the American band Chicago, released on January 29, 1991. As their first album of the 1990s, Twenty 1 was intended to extend Chicago's continuing success into another decade.

Retaining producer Ron Nevison from Chicago 19, the band sacked founding drummer Danny Seraphine and replaced him with Tris Imboden (though session player John Keane played the majority of tracks on Twenty 1) and added Dawayne Bailey, their touring guitarist since 1986, as an extra guitarist for Twenty 1's 1990 sessions.

According to Nevison, work on the album was somewhat fragmented, with the band members rarely in the studio together, and work continuing with session musicians while the band was on tour. The fragmentation was furthered when Humberto Gatica was assigned to mix the final version of the album without Nevison's input.

Unfortunately, while the music for Twenty 1 was familiar and commercial, the shifting of musical trends (Nirvana and the grunge movement were months away) lost Chicago valuable radio support and, consequently, Twenty 1 and its songs went mostly unheard upon their January 1991 release. Nevison maintains that if his original mixes had been used, the album would have been more successful: "It all would have worked if they’d left it alone. I promise you." Although "Chasin' The Wind" (#39) became a minor hit, Twenty 1 merely reached #66 before exiting the charts, making it their second least successful non-greatest hits album, only behind Chicago XIV.