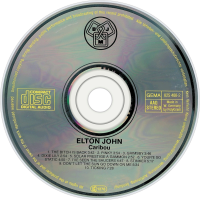 Caribou is the eighth album by the English singer-songwriter Elton John, released in 1974 (see 1974 in music). It was John's fourth chart-topping album in the United States and his third in the United Kingdom. The album contains the singles, "Don't Let the Sun Go Down on Me", which reached number 16 in the UK Singles Chart and number 2 in the US, and "The Bitch Is Back", which reached number 15 in the UK and number 4 in the US. Both these singles reached number 1 in Canada on the RPM 100 national Top Singles Chart (as did the album itself). The album was named for the Caribou Ranch recording studio, where part of the album was recorded. Elton and associates previously recorded three albums at Château d'Hérouville in France. In the US the album was certified Gold on 5 July 1974 and was certified Platinum and 2x Platinum on 23 March 1993 by the RIAA.

In the liner notes to the 1995 CD re-release, John described the album as being quickly recorded in January 1974, with only about 9 days to get everything recorded, as he and the band "were under enormous pressure" to finish the album and then immediately embark on a Japanese tour. Producer Gus Dudgeon would later add additional backing vocals, horns and other overdubs after John and the band had finished their work.

In addition to the singles, John has over the years played several others songs from this album in concert, including "Grimsby", "You're So Static", "Ticking" and "Dixie Lily". The 1995 CD reissue contains four songs from the general period in and around the "Caribou" release, though only two of them, the b-sides "Sick City" and "Cold Highway", were recorded during the album's sessions. "Step Into Christmas" was recorded during a previous one-off single session, and "Pinball Wizard" was recorded at The Who's Rampart Studios in England during the sessions for the "Tommy" movie score and soundtrack album.