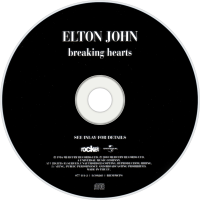 Breaking Hearts is the eighteenth studio album by British singer/songwriter Elton John, released in 1984. It features the quartet of John, Davey Johnstone, Dee Murray and Nigel Olsson. There were two hit singles from the album: the US #5 hit "Sad Songs (Say So Much)" and the UK #5 hit "Passengers".

This was the last studio album until 2001's Songs from the West Coast that would feature Olsson on drums. It was also the last in which John played both piano and keyboards in the studio by himself. There would be a backup keyboardist for every album moving forward.

Breaking Hearts was also the first album since Victim of Love to not feature a string or horn section on any track. This is one of only two albums with John's classic band in which Ray Cooper was not part of the lineup, the other being 1973's Don't Shoot Me I'm Only the Piano Player. Shortly after the tour, the band lineup would change and Gus Dudgeon, John's former producer, would produce the next two albums. It was certified Platinum in the U.S. by the RIAA.