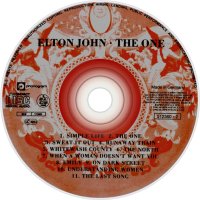 The One is the 23rd studio album by British singer/songwriter Elton John, released on 22 June 1992. It was recorded at Studio Guillame Tell in Paris, produced by Chris Thomas and managed by John Reid. The album was dedicated to Vance Buck, and its cover artwork was designed by Gianni Versace.

The One spent three consecutive weeks at #2 without ever reaching #1 in the UK, being kept off the top spot by Lionel Richie's Back to Front compilation. However, it was John's biggest selling album in the US since 1975.

Olle Romo collaborated with John and lyricist Bernie Taupin on one song, "Runaway Train", on which Eric Clapton sings a duet with John. Pink Floyd's David Gilmour makes an appearance playing guitar on "Understanding Women". John's former drummer, Nigel Olsson and female backing vocalist Kiki Dee (who along with John had a duet with the song "Don't Go Breaking My Heart") and longtime guitarist Davey Johnstone provided backing vocals on a few songs.

This was John's first album project since his rehabilitation from drug and alcohol addictions and bulimia in 1991. This is the last studio album to feature his Roland RD-1000 digital piano. John started playing a Yamaha Disklavier piano shortly after. The 58-minute album is the longest non-double album for him. The One was certified 2x platinum in the US by the RIAA.