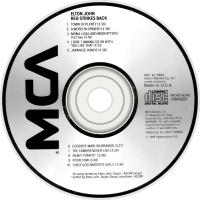 Reg Strikes Back is the 21st studio album by British singer-songwriter Elton John, released in 1988. It was his self-proclaimed comeback album, and his own way of fighting back against bad press. The "Reg" in Reg Strikes Back refers to John's birth name, Reginald Kenneth Dwight.

This was the last album that bassist Dee Murray appeared on prior to his death in 1992. The tracks "I Don't Wanna Go on with You Like That" and "A Word in Spanish" peaked at #2 and #19 on the Billboard Hot 100, respectively. John brought back the record producer Chris Thomas for the album. This is the first studio album to be recorded and released after John's throat surgery the previous year. The album cover featured costumes and props from John's collection that he decided to put up for auction.

The album was certified Gold in the U.S. by the RIAA.