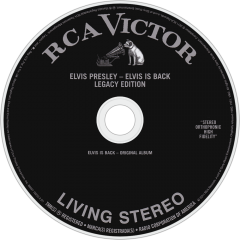 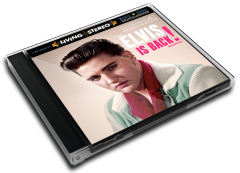 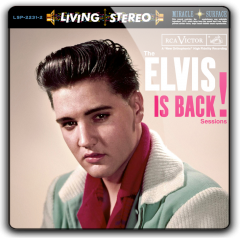 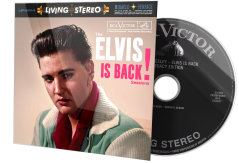 Elvis Is Back! is the fifth studio album by Elvis Presley, released on RCA Victor Records in mono and stereo, LPM/LSP 2231, in April 1960. Recording sessions took place on March 20 and April 3, 1960, at RCA Studio B in Nashville, Tennessee. It was Presley's first album to be released in true stereo. It peaked at number two on the Top Pop Albums chart and is listed, along with his debut and From Elvis in Memphis, in the book 1001 Albums You Must Hear Before You Die. It was certified Gold on July 15, 1999, by the Recording Industry Association of America.

The first album by Presley after his military discharge from the army, the first day of its sessions were attended by Presley's manager, Colonel Tom Parker, his assistant Tom Diskin, and representatives from RCA in a show of interest regarding whether or not Elvis still "had it" after two years in uniform.His long-serving guitarist Scotty Moore, pianist Floyd Cramer, and drummer D. J. Fontana had returned, along with his back-up vocal quartet The Jordanaires, but the other musicians had only played on one previous session with Presley. One new face at the sessions whom Presley had befriended while in the service, Charlie Hodge, would become a member of the "Memphis Mafia" and a mainstay in his return to live performance at the end of the decade. Pressure aside, the sessions were successful, the album a highlight of the entire decade and a declared favorite by Presley regarding his own work. He moved beyond his standard rock and roll sound of the 1950s, combining doo-wop, gospel, blues, and even jazzy tones from his version of "Fever" following so close to that of Peggy Lee from 1958. The results yielded a new sound for Presley, with a varied song selection, moving him further toward the pop music he would undertake as the decade progressed.

Prior to this, only his second album fully derived from a specific set of sessions undertaken expressly to make a particular album.

RCA first issued the original twelve-track album on compact disc in 1988. The May 18, 1999 reissue included six bonus tracks recorded at the same two sessions for the album and issued as the sides to three singles. Those three singles, "Stuck on You", "Are You Lonesome Tonight?", and "It's Now or Never" all topped the singles chart; the b-sides all also charted independently in the Top 40. "It's Now or Never" had been adapted from the 1898 Neapolitan song "'O Sole Mio", and "Are You Lonesome Tonight?", a ballad from 1926, had been the only time the Colonel had requested Elvis record a specific song.

On January 18, 2011, Legacy Records released a Legacy Edition with the entirety of the 1999 reissue on one disc, appending the single "Surrender." A bonus disc included the entirety of Something for Everybody along with the b-side to "Surrender" "I Feel So Bad," the singles "(Marie's the Name) His Latest Flame" and "Good Luck Charm" along with their respective b-sides. Other reissues include a Steve Hoffman remastered DCC Gold CD prepared from the original tapes in 1997, and an expanded edition by the Follow That Dream collectors label on April 1, 2005.