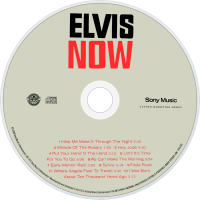 Elvis Now is a gold-selling Elvis Presley album from 1972. Despite the "now" in the title, the tracks on this album were recorded anywhere from one to three years before its release. The Beatles' "Hey Jude" was a leftover from the legendary sessions at the American Studio in Memphis in early 1969 and, judging by its casual performance, not intended for an album release. "Sylvia" and "I Was Born About Ten Thousand Years Ago" were recorded during the Nashville "marathon" sessions of June 1970 (the latter had been released in fragmentary form on the Elvis Country album). The rest of the songs emanate from the more recent sessions held at RCA Studio B in Nashville in March, May, and June 1971.

Unlike Elvis' other albums of that period (Elvis Country, He Touched Me and Elvis sings The Wonderful World of Christmas, each dedicated to a particular genre) Elvis Now encompasses a variety of genres, including country, gospel, soul and pop.

The only single from the album, "Until It's Time for You to Go" / "We Can Make The Morning" reached number 9 on the Adult Contemporary Chart in the US in March 1972 and number 5 on the UK Singles Chart in April 1972. The album was certified Gold on March 27, 1992 by the RIAA. "Sylvia" became a big hit for Elvis in Brazil in the 70s;

In 2010 an extended version of the album was released as part of the FTD collector series. It consists of the original 1972 album and a number of bonus tracks, originating from the 1971 Nashville sessions: two non-album singles from 1971 ("I'm Leavin'" and "It's Only Love"), a b-side from the upcoming "An American Trilogy" single ("The First Time Ever I Saw Your Face") as well as plenty of outtakes, including "Don't Think Twice, It's All Right" informal jam, lasting more than nine minutes (its shortened version having been included on the 1973 Elvis album).