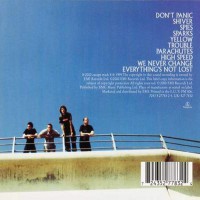 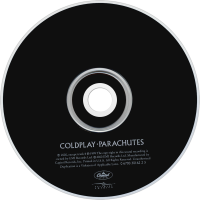 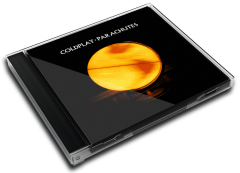 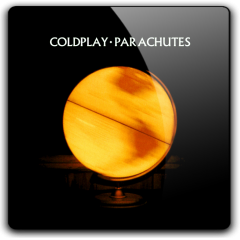 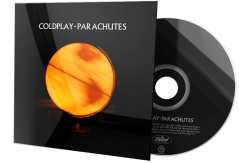 Parachutes is the debut album by British alternative rock band Coldplay, released by the record label Parlophone on 10 July 2000 in the United Kingdom. The album was produced by the band and British record producer Ken Nelson, excluding one track which was produced by Chris Allison. Parachutes has spawned the hit singles "Shiver", "Yellow", "Trouble", and "Don't Panic".

The album was generally a commercial success, and was met with positive reviews. Upon release, the album quickly reached number one in the United Kingdom, and has since been certified 7x platinum. In the United States, the album peaked at number 51 on the Billboard 200, and has since been certified 2x platinum. It won the Grammy Award for Best Alternative Music Album in 2002, and has earned the band various accolades since its release. Parachutes is number 12 on the list of the 20 biggest-selling albums of the 21st century in the United Kingdom, and was the winner of the Best British Album award at the 2001 Brit Awards. As of 2011, it has sold around 8.5 million copies worldwide.

User Album Review
It's all a question of what you want from your rock stars. The criticism most often levelled at Coldplay (certainly round these parts) is that they will never be the saviours of rock'n'roll. They will never cause front-page tabloid sensation and they really like their parents. Frankly, they're more likely to enjoy a nice cup of tea in front of the TV than throw it out the window.

But, hang on. Weren't Oasis everything we could want from a rock band once? They fought, had rock star girlfriends, slagged people off and wanted loads of cash to blow on stupid houses. Fine, but those are exactly the things that have made them an embarrassment; an endless, dull cocaine comedown. Remember the disappointment you felt after 'Be Here Now'? Coldplay will never let you down like that.

Like Travis before them, Coldplay care about what really counts. 'Parachutes' is all that matters in the world to singer Chris Martin. It only takes one listen to realise how he has poured every thought, every feeling he's had in the last two years into this record. With the focus so much on Chris' voice here, it's like reading one long, intimate love letter.

/img/coldplay0600.jpg). It's powerful because its sentiment is so simple. And, let's face it, so easy for everyone to comprehend.

Again, in the devotional 'Yellow' ("For you, I bleed myself dry", no less) or the gorgeous regret of 'Trouble' ("I never meant to do you harm"), it's the force of feeling which counts. That's what brings the entirely favourable comparisons to Jeff Buckley, The Verve, even Radiohead. But it's far gentler than anything the latter have ever done. Unlike Thom Yorke, Chris exists in a place we can almost understand. A place that Fran Healy might have passed through, but is too happy with his girlfriend to really remember.

All told, it's incredible this is a debut album. Accomplished, yet subtle, it works perfectly as a whole in a way all the production skills in the world couldn't replicate. Forget trashing rooms and rent-a-quotes, just listen. This really is all that matters.

Let it be that simple for once.