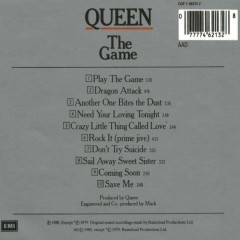 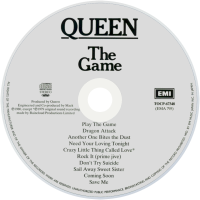 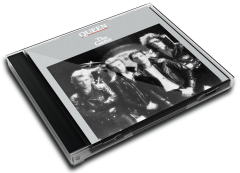 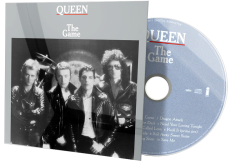 The Game is the eighth studio album by British rock band Queen released on 30 June 1980. It was the only Queen album to reach No. 1 in the US and became Queen's best selling studio album in the US with four million copies sold to date, tying News of the World's US sales tally. The album received very favourable reviews. Notable songs on the album include the bass-driven "Another One Bites the Dust" and the rockabilly "Crazy Little Thing Called Love", both of which reached No. 1 in the US. The Game was the first Queen album to use a synthesiser (an Oberheim OB-X).

The album features a more pop/rock sound than its predecessor, Jazz. The album's style would be augmented on Queen's next release Hot Space, and future Queen albums. At approximately 35 minutes 39 seconds, The Game is the 2nd shortest of Queen's studio albums, with their subsequent soundtrack for the film Flash Gordon being shorter by 39 seconds. It is estimated to have sold 12 million copies worldwide, including over 4.5 million in the United States.

Re-issued on May 2003 on DVD-Audio with Dolby 5.1 surround sound and DTS 5.1. The 5.1 mix of "Coming Soon" features an alternate backing track, because the final master tapes were not found when mixing the album to 5.1.

The photo on the cover of the EMI CD is different from that originally used on the LP and cassette even though the Hollywood CD still has the original photo. The original photo (with Taylor having folded arms and May not having a hand resting upon his exposed hip) is shown in the article. This alternate photo was also used on cover of the DTS DVD-Audio edition of the album released in 2003.

"Crazy Little Thing Called Love", "Sail Away Sweet Sister", "Coming Soon", and "Save Me" were recorded from June to July 1979. The remaining songs were recorded between February and May 1980.

Album Review
Jazz was hysterical in every sense of the word, but the music press comprehensively failed to get the joke, particularly in the US, where Rolling Stone's Dave Marsh came to the improbable conclusion that Queen were Nazis: "The first truly fascist rock band." Attentive as ever to the opinions of rock critics, the US public responded by buying 4m copies of Jazz's followup, 1980's The Game (★★★★). Big on perfectly done power ballads, it's more streamlined and less berserk than its predecessor, although such things are relative. It still features a song called Dragon Attack, while anyone jonesing for the weirdness of Jazz is directed to Don't Try Suicide, on which Freddie Mercury attempts to dissuade a friend from topping himself using the winning argument that he finds suicidal people annoying: "When you do it, all you do is get on my tits." If you want to hear how extraordinary Queen could be, there's Another One Bites the Dust, a white rock band's disco pastiche that genuinely bears comparison with the masters of the genre, the greatest record Chic never made.