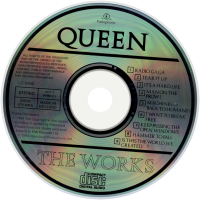 The Works is the eleventh studio album by British rock band Queen, released in February 1984. A partial return to their rock roots, although with a much lighter approach, the record has also the heaviest electronics amongst all group albums. In comparison, rock was mostly absent on their previous effort Hot Space, which gave room to dance and funk with the use of analogue synths and brass. Freddie Mercury praised the album saying it helped re-establish the band, especially in Europe. The Works is estimated to have sold 12 million copies worldwide.

Recorded at the Record Plant Studios and Musicland Studios from August 1983 to January 1984, the album's title comes from a comment drummer Roger Taylor made as recording began - "Let's give them the works!"

Following the release of and subsequent touring for their 1982 album Hot Space, the four members of Queen opted to take a break from the band the following year, indulging in solo projects and taking the chance to stretch in individual directions. While a spring tour of South America had been an early possibility, especially following the band's success there two years prior, equipment and promotional problems brought an end to these plans. Brian May worked with Eddie Van Halen and others on the Star Fleet Project, while Freddie Mercury began work on his solo album. By August 1983, however, the band had reunited and began work on their eleventh studio album. It would be Queen's first album for EMI (and its United States affiliate Capitol Records) worldwide after the band nullified its recording deal with Elektra for the United States, Canada, Australia and Japan.

Recording commenced at Record Plant Studios in Los Angeles - Queen's first time recording in America - and Musicland Studios in Munich. Also during this time, their manager Jim Beach offered them the opportunity to compose the soundtrack for the film The Hotel New Hampshire. The band agreed, but soon discovered much of their time was being spent on the soundtrack instead of the upcoming album, and the project fell through. Only one song written for the soundtrack, "Keep Passing the Open Windows", made it onto The Works. By November 1983, Roger Taylor's "Radio Ga Ga" was chosen as the first single from the album. The Works was released on 27 February 1984.