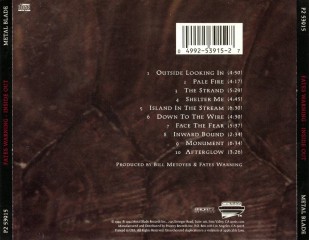 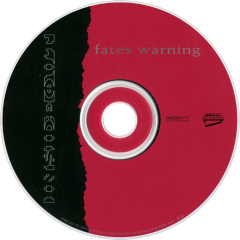 Inside Out is the seventh studio album by progressive metal band Fates Warning, released on July 26, 1994 through Metal Blade Records. The album continues with the commercial sound that Parallels began. It was the last to feature long-time bassist Joe DiBiase, who left after its release, as well as the last to feature guitarist Frank Aresti until his return to band in 2005.

Album Review
A decent follow-up to Parallels that at times exceeds it, but not as effective as a collective whole. Mark Zonder's drumming approach continues to impress and Jim Matheos' guitar arrangements have grown increasingly complex; however, the band seems to be struggling for a clear direction. An effort toward commercial success is evident; however, they are also attempting to satisfy their core fan base. The standard strong structures can grow tiresome, but there are catchy melodies such as "Shelter Me" and "Pale Fire." "Island in the Stream" is a memorable ballad that works despite the use of strings. "Down to the Wire" and "Face the Fear" are aggressive songs that show the band's energy, but again suffer from pop clichés. "Monument" is the session's best performance and has become one of the band's most requested songs (Mark Zonder is simply astonishing on this track). For all the fans who are in awe of Dream Theater's Mike Portnoy, it would be a disservice not to investigate the progressive stylings of Zonder. The music here is bubbling just below the surface, but never quite erupts as it should. Still recommended for Zonder's performance alone.